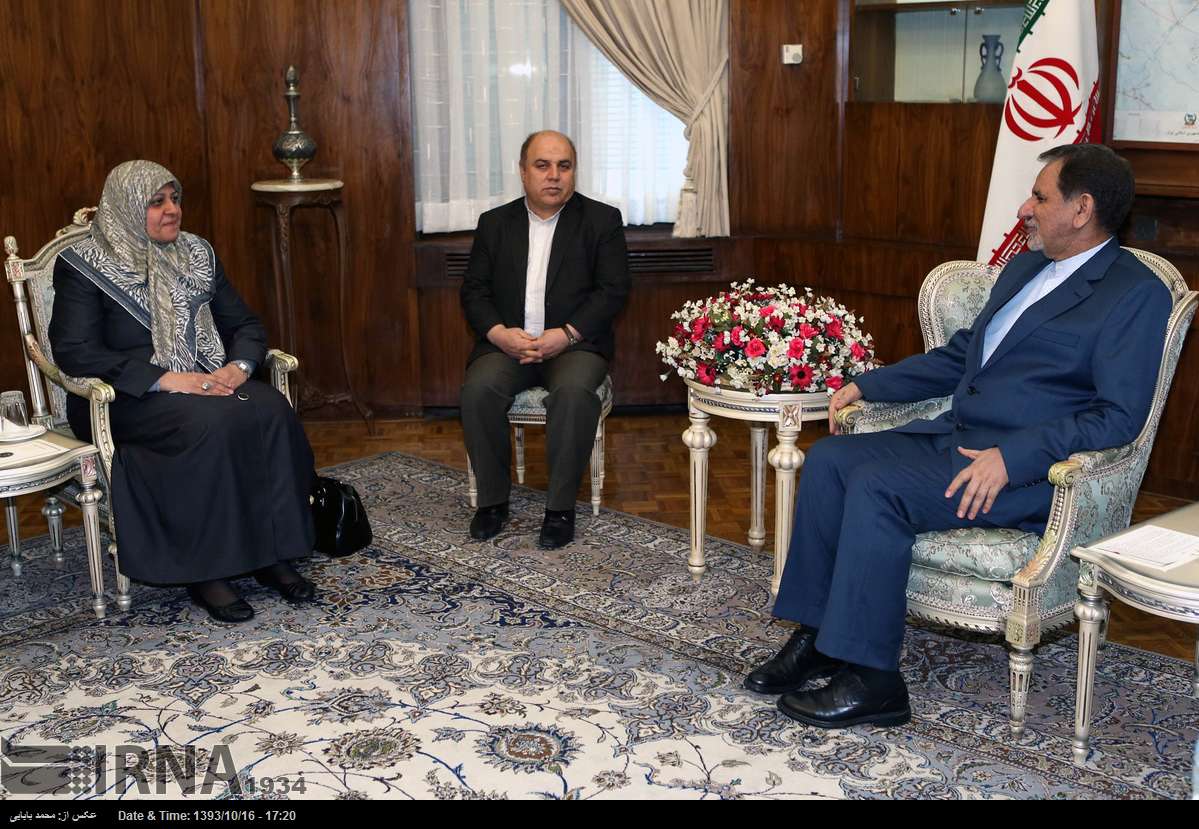 He made the remarks in a meeting with Iraqi Minister of Health Adilla Hamoud Hussein.

Jahangiri said the Islamic Republic of Iran has always been supporting Iraq territorial integrity and expansion of democracy based on the mechanisms envisaged by Iraq Constitution.

Congratulating the Iraqi minister on victories of Iraq nation and army in fighting Daesh terrorist group, Jahangiri expressed hope that the process of clean-up of Iraqi territories from terrorist groups should continue.

He said that based on the information available to the Islamic Republic of Iran, the Iraqi people, elite and religious figures, will leave behind current problems and overcome the challenges ahead.

He appreciated Iraqi government for new measures it has taken in the country and its strengthening ties with the neighbors and said certain neighboring states, with their wrong approaches are supporting terrorist groups, adding that they have to rectify their past record and use the opportunity to cooperate with the Iraqi government, to eliminate terrorism.

Jahangiri added that certain countries that supported terrorist group of Daesh initially and remained indifferent towards their crimes, are now exposed to danger posed by the terrorist group.

Jahangiri said Tehran considers no limit for expansion of relations with Baghdad and Tehran is ready to upgrade its cooperation with the country in all economic related fields.

Emphasizing that Iran is ready to put its scientific and technological experience at the disposal of Iraq, Jahangiri said Iran enjoys abundant potentials and experience in health, medication and medical sciences and supports cooperation between health ministries of the two countries.

Hussein said that Daesh terror attacks do not target only Iraq and the inferno of the plot threatens other regional states as well.

‘Despite the terror attacks in Iraq, people of the country managed to hold elections successfully and form government to determine their own fate.’

Noting that had certain countries refused to provide Daesh terrorist group with financial and logistic support, they would not have been able to infiltrate into Iraq, he said, adding that to enhance its influence in Iraqi soil, Daesh terrorist group wants to divide various parties and wings in the country but current approach of Iraqi government is build-up of unity and integration among all groups and wings.