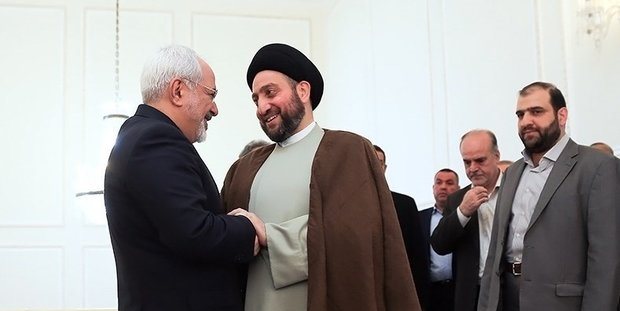 TEHRAN, Jan. 05 (MNA) – Iran’s FM in his meeting with Head of the Islamic Supreme Council of Iraq, praised Iraq’s cooperation with Iran in the fight against terrorism.

Pointing to the constructive role by scholars, clerics, authorities and religious leaders, Iran’s Foreign Minister Mohammad Javad Zarif praised Iraqi politicians’ approach, especially Heidar al-Ebadi to strengthen national unity and promote cooperation with Iran in the fight against terrorism as the common enemy of both countries.

Pointing to Arbaeen walking forming a crowd of over 20 million people in Karbala as a symbol of unity and humanity, Zarif appreciated kindness and hospitality of the people of Iraq toward Iranian pilgrims.

Head of the Islamic Supreme Council of Iraq Ammar al-Hakim, for his part, stressed the need to take advantage of high potentials of the two countries’ bilateral ties in the political, economic and commercial areas.

Pointing to the deep and strong strategic ties between Iran and Iraq, Ammar al-Hakim underlined further efforts and cooperation as necessary factor to turn challenges into opportunities in favor of the people of the two countries.