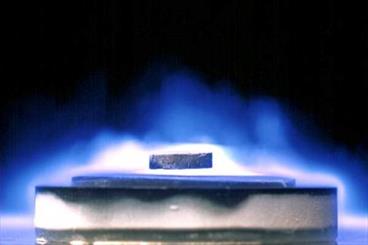 The conductor, often abbreviated YBCO, a family of crystalline chemical compounds is the first in its sort in the world. Morteza Khayyat, the board member of Mechanics and Aerospace Faculty of Science and Research branch told Mehr News science correspondent that saving energy was the most important concerns in the modern world; “this has attracted and channeled large amounts of resources to research into the ways to improve energy consumption and finding cheap and less dangerous  sources of energy; superconductivity is a strand of quantum mechanics with high potentials to contribute to the field,” said the researcher.

“A superconductor with zero electrical resistance in critical temperature, could conduct energy without any wasting and could remain floating on a magnetic field; the phenomenon has a significant prospect of having a considerable contribution to the future,” said Khayyat. “This superconductor has an ideal condition temperature of 93 K, which finds its stable structure with getting a certain number of oxygen molecules into its sheets; to examine the properties of the superconductor, an XRD (X-ray diffraction) test detects properties such as its crystal network constant, crystal structure, and percent of oxygen in the structure,” he detailed.