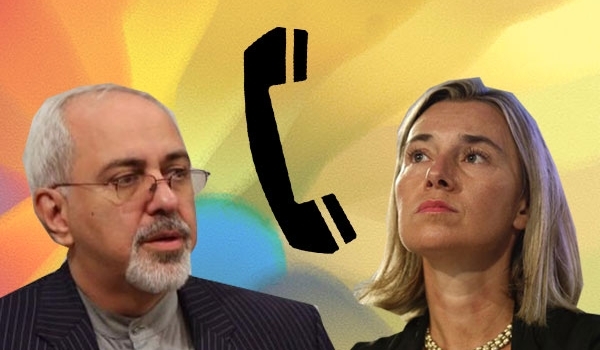 TEHRAN (FNA)- Iranian Foreign Minister Mohammad Javad Zarif and EU Foreign Policy Chief Federica Mogherini in a telephone conversation discussed the ongoing nuclear talks between Tehran and the Group 5+1 (the US, Russia, China, France and Britain plus Germany) as well as the regional developments.

During the phone conversation on Monday evening, Zarif and Mogherini underlined the need for continued talks and exchange of views between Iranian negotiators and their G5+1 counterparts.

At the end of the 10th round of Iran-powers talks in Vienna in November, Tehran and the six countries agreed to extend negotiations until July 1, 2015, after they failed to reach an agreement on a number of key issues.

On Sunday, Iranian President Hassan Rouhani underscored that the country would not trade its principles for reaching a nuclear agreement with the world powers.

“Our political experience tells us that a country cannot make constant growth in isolation but this doesn’t mean that we withdraw from our principles and causes,” Rouhani said, addressing the first forum on ‘Iran’s Economy’ in Tehran.

“Common threats, opportunities and interests are the bases of foreign policy discussions and principles and causes are not discussed in foreign policy,” he added.

Rouhani stressed that the nuclear talks between Iran and the G5+1 is meant to bridge the gap between the two sides to provide for each other’s demands.