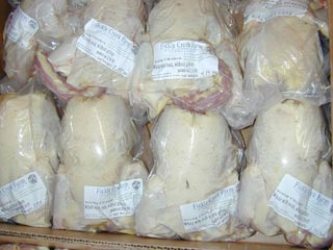 TEHRAN (Tasnim) – An Iranian official announced on Tuesday that Russia has okayed chicken production process in Iran, and exports to the country will begin soon.

“The production process was verified during the visit, and Iran will soon begin its chicken exports to Russia,” Darabi added, saying that the slaughterhouses in Iran met the required standards of Russia.

As regards the volume of chicken exports to Russia, the official mentioned that the way is paved for the exports, and the rest (of the export process) depends on other issues like cost-efficiency, customer orientation, and the businessmen from both countries.

He went on to say that the quality of chicken production in Iran allows the country to enter the Russian market and boost its current export rate of 50,000 tons per year.

In addition to Tehran-Moscow cooperation on the nuclear talks between Iran and world powers, the two countries have also expanded their economic ties in recent months.

In October, Iran’s minister of agriculture declared that Tehran is considering the potential for extensive fruit exports to Russia.

A couple of weeks later, an Iranian vice-president said that the country is prepared to export various types of high-technology products to Russia. He later noted that Iran is also set to export $30 million worth of bio-based medicine to Russia.

In November, it was announced that Iran and Russia plan to double the volume of trade transactions in the near future, while a Russian official had earlier said that the value of trade between Iran and Russia may soon increase from the then $1.7 billion to $3 billion.

These came after the Iranian President Hassan Rouhani said that the expansion of economic exchanges between Iran and Russia, especially in the areas of oil and trade, will soon boost mutual cooperation between the two sides to the highest regional level.