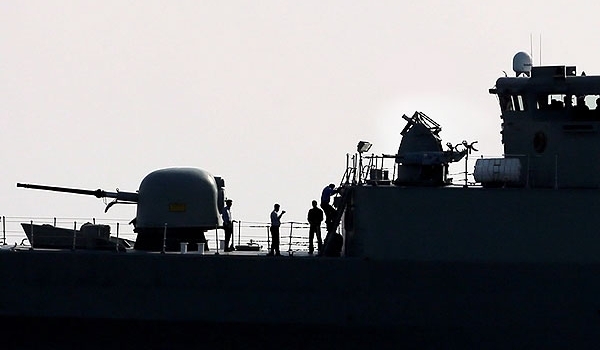 TEHRAN (FNA)- The Iranian Navy equipped its home-made Jamaran destroyer with chaff and flare-dispensing systems to divert the missiles fired by other vessels or enemies’ fighter jets.

The system has been mounted behind a 76-mm artillery, named Fajr 27, on the deck of the destroyer.

Chaff and flares are passive and defensive countermeasures to confuse and divert radar-guided or infrared-guided missiles fired by enemy aircraft, land launchpads and sites and vessels.

But the new images were the first to be released of a phased array radar system mounted on an Iranian warship. The home-made phased array radar was caught on cameras for the first time during the massive military drills staged in the Southern and Southeastern parts of Iran on December 25-31.

The long-range radar is capable of detecting and identifying targets with a radar cross section of 4 meters in a 200km distance.

Asr which has also been mounted on Iran’s other home-made Damavand and Sahand destroyers, can be used in different naval missions and in detection of aerial targets, including cruise missiles.

Jamaran destroyer- being equipped with Asr radar- was sent to the Gulf of Aden two months ago as part of the Iranian Navy’s 32nd flotilla of warships along with Bushehr logistic and combat warship and it returned to Iran’s territorial waters to take part in the last week’s wargames codenamed Mohammad Rasoulallah (PBUH); it returned to the Gulf of Aden again after fulfilling its mission during the drills.

Iran has locally made radar systems with different ranges up to some 1,850 miles (3,000 kilometers).

“The Sepehr radar system covers a range of over 2,500 kilometers and can detect stealth targets and micro UAVs at low, medium and high altitudes while it can also very easily identify and detect ballistic, semi-ballistic and cruise missiles,” Lieutenant Commander of Khatam ol-Anbia Air Defense Base Brigadier General Shahrokh Shahram said addressing the unveiling ceremony.

The commander underlined that Sepehr could successfully pass all tests.

Also in November, the radar went under a last test of operation and assessment, and General Shahram said the results were successful and “the information gathered by the radar during its last assessment test was for the first time fed into the country’s integrated radar and air defense network”.

The General said Sepehr provides the air defense units to identify hostile targets far from the country’s borders, leaving them with more time for decision-making and reaction.

In August 2013, Iran announced that it has finalized construction of space radars to detect satellite and space objects’ trajectories, adding that the country is now using new passive phased array radars to detect stealth targets and cruise missiles.

“The executive stages of Sepehr (Sky) space radar with the range of over 2,500km have been accomplished and the point for its deployment has also been specified,” Commander of Khatam ol-Anbia Air Defense Base Brigadier General Farzad Esmayeeli told reporters in Tehran at the time.