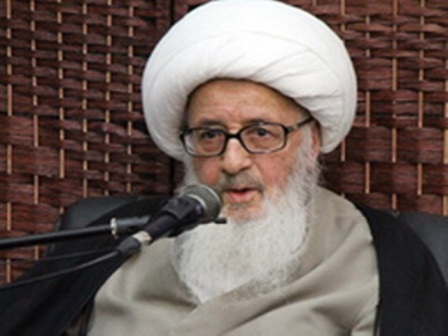 Qom, Jan 6, IRNA – Grand Ayatollah Hossein Vahid-Khorasani has expressed hope that peace and tranquility would be restored to Iraq so that Baghdad could carry out its development projects.

In a meeting with the Leader of Islamic Supreme Council of Iraq (ISCI) Ammar Hakim in Qom on Tuesday, the Grand Ayatollah said, ‘I hope that the problems of Iraq will be solved and favorable conditions prevail.’

He also told his Iraqi visitor that the problems of holy shrines in Samarra should be dealt with.

The senior cleric further appreciated the ISCI’s efforts to enhance unity among Muslims and settle the Iraqi tensions.

In the meeting, Hakim presented a report on the issue of Takfiri and terrorist Group of Daesh, adding that following a Fatwa by Grand Ayatollah Sistani in Iraq, people of Iraq have achieved great victories over the terrorists.

Hakim, who is currently in Iran, went to Qom on Tuesday and met with a number of prominent religious leaders in this holy city.