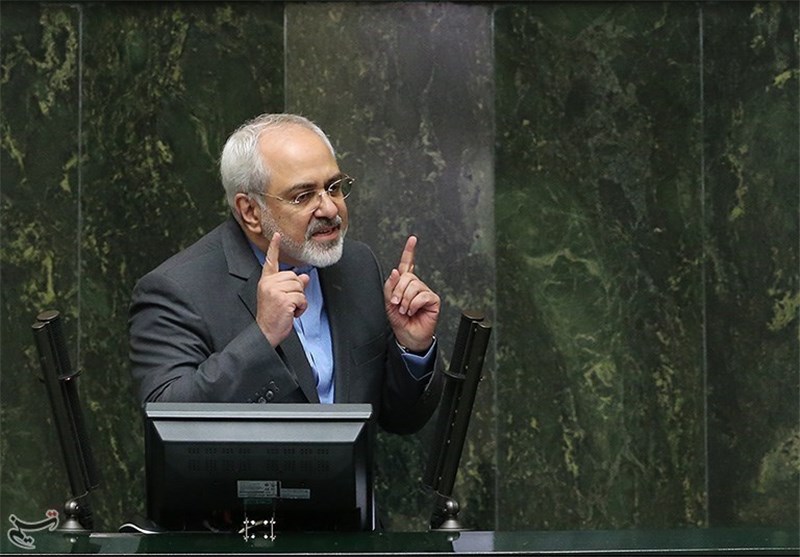 He made the remarks here on Tuesday in the Iranian parliament when answering questions posed by one hundred members of the parliament.

Briefing the legislators on the objective and performance of the Iranian nuclear team in negotiations with G5+1, he said self-dependence, relying on the nation’s own internal resources, following principles of the Economy of Resistance, promoting defense capabilities, playing an active and influential role in the regional developments and national solidarity are the keys to the strength of the Iranian nation.

He said the nuclear talks practically prevented conspiracies hatched by the Zionist lobbies and American radicals to bring down Iran’s oil exports to zero.

An outcome of the negotiations was the return of parts of nation’s assets which were frozen unjustly by enemies, the foreign minister noted.

He stressed that no wise person would now talk about having all options – including war – on the table against Iran, adding that, rather, the world is now focusing on the time and ways of removing sanctions.

Likewise, he added, there is no talk of suspending enrichment or closing down of Fordo and Arak nuclear sites any longer.

He also said that in their talks with G5+1 member states, Iran’s skilled experts have been considering the details of continuing activities of the country’s nuclear sites.

Now the anti-Iran threats of the Zionist regime’s prime minister sound quite hollow and his speeches have no audience, he said.

He asserted that this in itself was another achievement of the wise, logical and coordinated policies Iran has been following.

The Iranian foreign minister noted that as another victory for Iran, the Zionist regime has absolutely failed to achieve its evil goals against Iran and Islam.

Zarif reiterated that the Western states involved in the talks are now well aware of the fact that Iran has been detested hegemony and remained absolutely committed to its obligations.