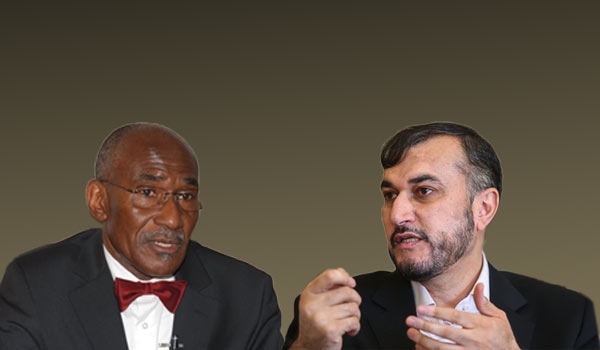 TEHRAN (FNA)- Iranian Deputy Foreign Minister Hossein Amir Abdollahian said Tehran is ready to provide the African Union with the scientific and technological achievements it has made in the last 35 years.

Amir Abdollahian made the remarks in a meeting with African Union Commissioner for Human Resources, Science and Technology Martial De-Paul Ikounga in Tehran on Tuesday.

“Cooperation with the African Union, specially with the Human Resources, Science and Technology Commission, is of paramount importance to Iran,” the Iranian deputy foreign minister said.

He pointed to Iran’s great achievements in human resources, scientific and technological fields despite the western sanctions in recent decades, and expressed Tehran’s readiness to have comprehensive cooperation with the AU and African countries in these areas.

De-Paul Ikounga, for his part, admired Iran’s all-out development, and said the African Union favors expansion of cooperation with Iran in different spheres.

“Africa needs Iran’s experiences in development areas and the purpose of this visit is to study cooperation between Iran and the African Union in different fields,” he added.

In December, Amir Abdollahian said Tehran attaches special importance to the progress and enduring security of the African continent.

“Iran supports development and sustainable security in East Africa,” Amir Abdollahian said in a meeting with visiting Executive Secretary of the Intergovernmental Authority on Development (IGAD) Mahboub Maalim in Tehran.

The IGAD executive secretary, for his part, pointed to the status quo of Iran-IGAD cooperation, and said, “Broadening of cooperation between IGAD and Iran is of paramount importance.”

The two sides discussed practical ways to broaden Iran-IGAD cooperation in Africa, including in agriculture, implementation of water, electricity and watershed projects.

Amir Abdollahian and Maalim also agreed on preparing a document to determine the framework of Iran-IGAD cooperation.