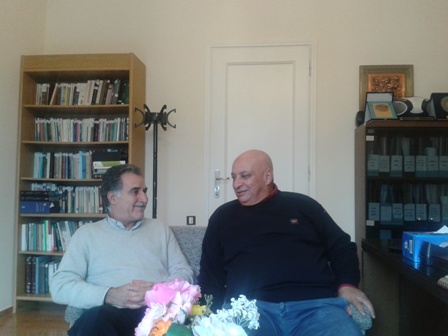 Athens, Jan 4, IRNA – Head of Greece Muslim Association said on Sunday that unity is one main teachings of Islam and Iran serves as cradle of Muslim solidarity.

Naeim al-Kundour told IRNA that unity is one of the most important principles of the Islamic teachings and such Iran has undertaken due role to create unity among the Islamic Ummah.

He said that the Muslim world is subject to different sufferings emanated from the divide among the Muslims.

He blamed the US administration for sowing discord among the Muslim Ummah to achieve hegemonistic goals.

Al-Kundour said that late Imam Khomeini considering importance of unity declared ‘Unity Week’ to maintain unity and consolidation of the Ummah against different plots of devils and enemies of Islam.

A week including birthday of Prophet Mohammad (PBUH) is designated by late Imam Khomeini as the Unity Week.

He deplored the crimes against humanity and the war crimes perpetrated by the Israeli authorities against the Palestinians licing in Gaza and said that Palestine is under occupation of the Zionist regime and residents of Gaza Strip are being killed daily by the forces of the regime and Iraq, Syria are suffering from terrorists groups activities.

It is surprising that while Palestinian people are under pressures of the Zionist regime, a number of countries instead of helping such oppressed people are collaborating with heads of the regime and do not pay attention toward situation of Holy Qods. Naeim said that to release holy Qods and settle Islamic world problems, the sole way is Muslim unity.