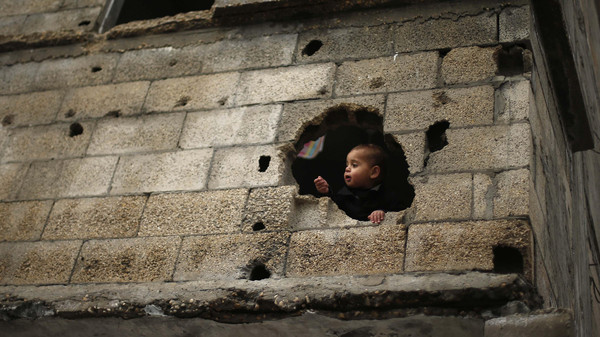 A Palestinian boy looks out through a hole in his family house witnesses said was damaged by Israeli shelling during the July-August Gaza war, Gaza City January 4, 2015. (Reuters)

The “crimes” Israel committed in the most recent Gaza war will be part of the first case the Palestinians plan on referring to the International Criminal Court, a Ramallah-based rights group said.

The case will be based on Israeli actions in the Occupied West Bank and the Gaza Strip from June 13, 2014, director of the Ramallah-based rights group Al-Haq Shawan Jabarin told Agence France-Presse.

Chief Palestinian negotiator Saeb Erakat confirmed Gaza  would be one of the cases referred to the court, but also said there would be a file put together on Israeli settlement building on land seized during the 1967 Six-Day War.

“The main files will be the aggression against Gaza and the settlement file, since this is a continuous crime,” Erakat said on Sunday.

Cases referred to the ICC need “a very specific geographic location and timeframe,” Jabarin explained, adding that the same date had been selected by a U.N. commission probing alleged rights violations during the Gaza war and the period leading up to it.

On January 2, the Palestinians presented a formal request to join the Hague-based court in a move which opens the way for them to file suit against Israeli officials for alleged war crimes in the occupied territories.

The ICC can prosecute individuals accused of genocide, crimes against humanity and war crimes committed since July 1, 2002, when the court’s founding treaty, the Rome Statute, came into force.

If the application process goes as planned, the Palestinians should be able to refer a case in early April, with legal preparations to that end already well under way.

June 13 of last year was the date Israel began a massive crackdown in the West Bank after the kidnapping and subsequent murder of three Israeli teenagers, triggering a series of events which led to the seven-week Gaza war that killed nearly 2,200 Palestinians and 73 people in Israel.

Following the teens’ kidnap on June 12, Israel began its biggest sweep of the occupied territories in years, arresting more than 2,000 Palestinians in the West Bank and east Jerusalem.

On June 30, troops found the bodies of the three, unleashing a wave of national grief and anger that saw Jewish extremists murder an east Jerusalem teenager in revenge, which itself triggered furious protests in the eastern Arab sector of Occupied Jerusalem.