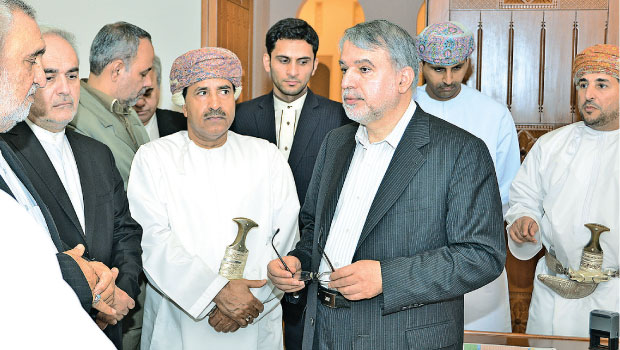 Oman and Iran signed a memorandum of understanding in Muscat on Tuesday. Photo-Times of Oman

Muscat: Cooperation between Iran and Oman in the area of historical documents is a step towards utilising the untapped potential for cultural cooperation, said an Iranian official.

“The MoU calls for the exchange of experience and expertise in the area of historical documents, especially restoration of these documents to save them from degradation,” Dr Mohammad Soltanifar, advisor to Dr Amiri, told Times of Oman in an interview.

It also calls for cooperation on exchange of these documents, historical maps and photos, he said, adding that as part of the agreement, joint exhibitions will be held in Iran and Oman in the coming months.

According to Soltanifar, the MoU is of high significance given the historical commonalities of the two countries.

“We have around 38,000 manuscripts, more than half of which are in Arabic,” said the official, noting that these can be valuable sources for research.

Apart from the expertise in restoring historical documents, maps and images, Iran has vast experience in the area of inscription, which it is keen to share with Oman, he added.

Training
On the joint training programmes between Iran and Oman, Soltanifar said that Oman has been sending Omani nationals to Iran to visit the Iranian libraries and archive institutions and undertake certain courses related to this field.

He noted that a few weeks ago, one of these groups visited Iran as part of a programme about oral history, which concerns the collection and study of historical information based on interviews with people who have observed historical events.

Their accounts of past events can be preserved as records for future generations, he said.

Lack of understanding
Soltanifar, who was visiting Oman for the first time, said that the meetings with Omani officials provided an insight into potential grounds for cooperation, which had not been explored properly in the past.

“Now, we have a better understanding of the requirements and areas of mutual interest,” he said.

The Iranian delegation visited the military museum of Oman as well but Soltanifar said that contrary to his expectation, he did not see any document about the military cooperation between Iran and Oman, especially during the Dhofar war.

Commenting on the Iran-Oman cultural cooperation, the official stated that in his opinion, the potential in this area has not been utilised, which can be attributed to the lack of understanding about the existing opportunities.

Progressive Oman
Soltanifar said that the Iranian delegation also had a meeting with the Khalid Hilal Al Mawali, the chairman of Majlis Al Shura, in which the relationship between the two friendly countries and the prospects of their future cooperation were discussed.

Al Mawali had visited Iran earlier and had held meetings with a number of Iranian officials during his visit.

“Oman has progressed a lot and is developing fast, and given its independent foreign policy, it can carve out a special place and gain a special status in the region,” said Soltanifar.