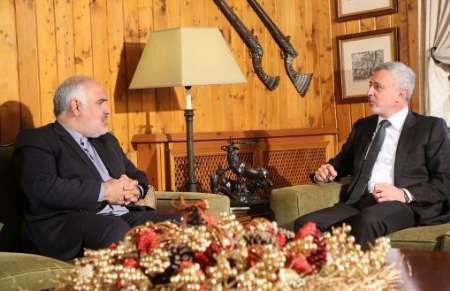 Frangieh made the remarks in a meeting with Iran’s Ambassador to Lebanon Mohammad Fathali.

The two officials exchanged views on present situation in the region, particularly the Syrian crisis and the threats posed by Takfiri and Zionist groups in southern and eastern Lebanese borders.

Referring to resistance of the government of Bashar Assad against Takfiri terrorists in Syria, the Lebanese political leader said situation could be much worst in Lebanon without the struggles of the Axis of Resistance.

Frangieh also welcomed talks between Hezbollah of Lebanon and the Tayyar Al Mustaqbal (Future Movement) which started since last week. The Lebanese leader expressed hope that the talks would have desirable outcomes.

Meanwhile, the Iranian ambassador voiced Tehran’s support for the talks between the two Lebanese parties.

Speaking to reporters at the end of his talks with the Lebanese political leader, Fathali said Lebanese people are able to select their own president.

He stressed that cooperation of all Lebanese political parties is a must for restoration of peace and security to that country.