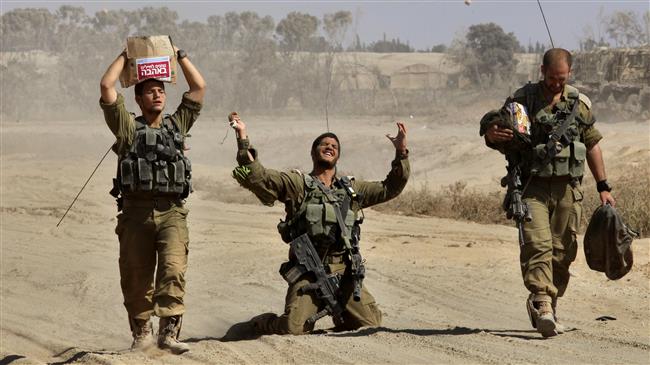 An Israeli soldier gestures in relief as he walks with comrades near Gaza. (File photo)

A new report by the Israeli military shows the number of Israeli soldiers who committed suicide doubled in 2014.

According to the latest figures released Friday, a total of 15 Israeli soldiers took their own lives last year, more than double the seven suicide cases in 2013.

The military said that 105 soldiers lost their lives in 2014, while they were in military service.

It added that 70 of the deaths happened during military activities.

Sixty-three soldiers were killed during the latest Israeli war on Gaza last summer, it added.

Israel’s Haaretz newspaper reported on Thursday that four of the soldiers who committed suicide had participated in the war.

The rise in suicide cases has prompted the Israeli military to check the impact of the Gaza war on the soldiers who took part in it.

“In fact, three soldiers taking their own lives after the operation is significant,” the daily quoted Colonel Keren Ginat, the mental health chief of the Israeli military, as saying.

The Israeli military unleashed aerial attacks on Gaza in early July and later expanded its military campaign with a ground invasion of the Gaza strip. Over 2,130 Palestinians, including around 570 children, lost their lives and some 11,000 were injured in the raids.

Many in Israel believe that the regime has failed to score a clear victory in the offensive, which took a heavy toll on Tel Aviv.