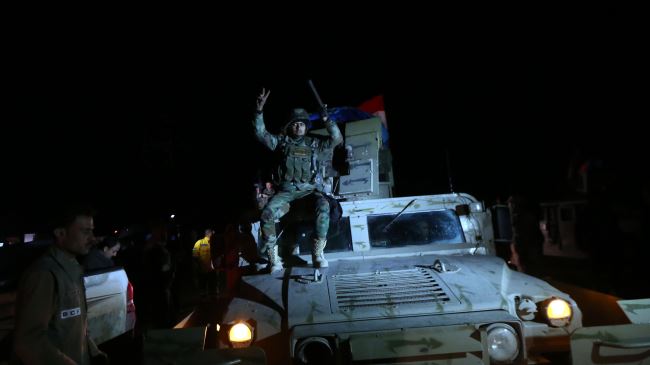 Iraqi Kurdish Peshmerga forces celebrate as they arrive in Sinjar, west of the northern Iraqi city of Mosul, on December 20, 2014.

Iraqi Kurdish Peshmerga fighters have regained control of a large area in the north following a military operation against ISIL Takfiri militants.

The offensive took place near the capital of Iraq’s semi-autonomous Kurdish region, Erbil, Kurdish forces said in a statement on Wednesday.

The Peshmerga forces launched their attack on the terrorist group’s strongholds between the two regions of Makhmour and Gwer, southwest of the city of Erbil. The targeted area was about 120 square kilometers (46 square miles).

“The objective is to push the enemy farther away from both areas,” read part of the statement.

The Kurdish fighters killed more than 30 terrorists in the clashes.

The Iraqi army, along with Peshmerga fighters and volunteer forces, has managed to inflict heavy losses on the Takfiri terrorists in the last few months.