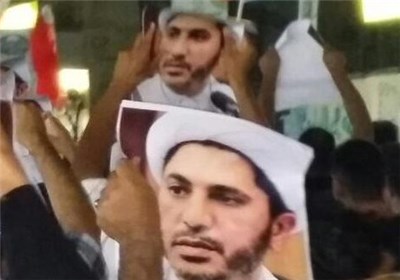 Bahrainis to stage rally in solidarity with detained cleric

TEHRAN (Tasnim) –Bahraini opposition urged people to take part in a rally on Friday in solidarity with the jailed cleric Sheikh Ali Salman.

The opposition groups called on all Bahrainis to join the rally planned to be held in the capital Manama to express support for Sheikh Ali Salman, secretary general of al-Wefaq National Islamic Society who was detained by Al Khalifa regime last week.

They described Sheikh Salman as an Islamic moderate figure who believes in Islamic and national unity and values such as freedom, human dignity and equal citizenship rights.

Opposition groups referred to the accusations leveled by the regime against the senior cleric as unjust, illusory and absurd.

They said the regime’s move to take Sheikh Salman into custody is aimed at stifling the revolution of Bahraini people who seek freedom, human dignity, justice and democracy.

According to Sheikh Salman’s lawyer, he is charged with “provoking hatred for the ruling regime and attending illegal demonstrations”.

Following the massive anti-regime protests held last Friday, Bahrain’s Interior Ministry had ordered Salman to appear before police investigators on Sunday without providing any explanation as to why the summons was issued.

Bahrain has been the scene of almost daily protests against the Al Khalifa regime since early 2011 despite a Saudi-backed crackdown on anti-regime protesters.

The peaceful demonstrators demand an end to suppression and want the establishment of a democratically-elected government.