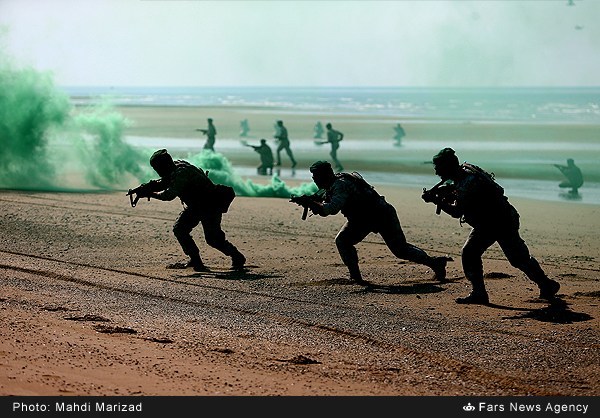 TEHRAN (Tasnim) – Six-day military exercises in a large area in south and southeast of Iran came to an end on Wednesday with naval parades in the Sea of Oman in the presence of President Hassan Rouhani and high-ranking military commanders.

President Rouhani arrived in the southeastern port city of Jask on Wednesday morning to review the naval forces on parade at the conclusion of the large-scale military drills that began on December 25.

Codenamed “Muhammad Rasulullah” (Muhammad, the messenger of God), the wargame was held at an area of 2.2 million square kilometers, stretching from the northern Indian Ocean (10 degrees latitude) to the Strait of Hormuz in the Persian Gulf and in the southern and southeastern Iranian provinces of Hormozgan and Sistan and Balouchestan.

During the Wednesday parade, the Navy deployed more than 100 vessels including combat ships, high speed rocket launcher vessels, submarines, hovercrafts and aircraft to demonstrate its capabilities.

The Navy’s 32nd fleet of warships also returned to the country’s waters to attend the parade after an overseas mission in the Indian Ocean.

Back on Monday, the fleet, consisting the Jamaran destroyer and Bushehr logistic vessel, rescued an Iranian oil tanker from a pirate attack around the Bab-el-Mandeb Strait as the vessels were patrolling in nearby waters as part of units participating in wargame.