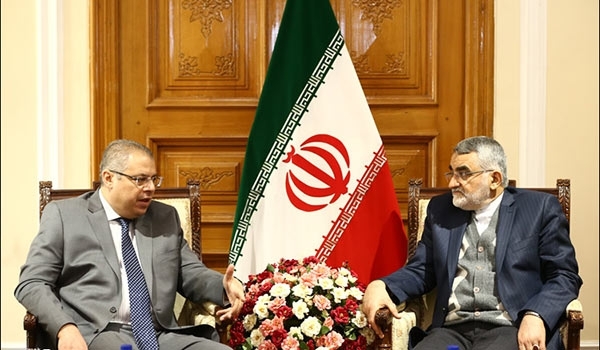 TEHRAN (FNA)- Iranian and Algerian officials called for enhanced ties between the two friendly countries, and voiced concern over the spread of blind violence in the region.

In a meeting between Chairman of the Iranian Parliament’s National Security and Foreign Policy Commission Alaeddin Boroujerdi Algerian Ambassador to Tehran Sofiane Mimouni on Tuesday, said expansion of relations between Iran and Algeria that enjoy abundant capacities and talented people can be to the benefit of both nations.

Boroujerdi, in the meeting, voiced the Iranian lawmakers’ firm will to upgrade parliamentary relations with Algiers.

“Parliamentary relations in various levels can serve as a proper means for enhanced cooperation in political, economic and commercial sectors,” Boroujerdi added.

Mimouni, for his part, said his country is interested in expansion of relations with Iran in different fields.

“Current relations between the two countries are not in tandem with existing capacities and promotion of the ties up to the favorable level will depend on cooperation between the two governments,” the Algerian diplomat went on to say.

He voiced concern over the menaces of terrorism for global security, peace and tranquility and said formation and strengthening of terrorist groups by western governments and their allies are aimed at tarnishing image of Islam and divide the Muslims, and called on Muslims to grow more united to foil enemies’ divisive plots.