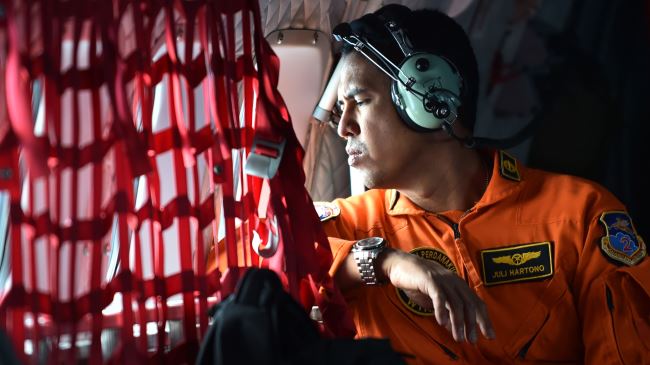 Bad weather has forced Indonesian rescue teams to suspend their search operations for the victims of the AirAsia Flight QZ8501 crash.

Supriyadi added that hundreds of people from the military, police and the national rescue agency were on standby waiting to resume the searches in Pangkalan Bun, the city with the nearest airstrip to the crash site, as soon as the weather conditions imporved.

Reuters cited a spokesman for the Indonesian Navy, Manahan Simorangkir Kadispenal, as saying on Tuesday that forty bodies have been recovered from the crash site. Different reports, however, put the total number of retrieved bodies at 7.

Indonesian National Search and Rescue Agency chief Bambang Soelistyo said the bodies will be brought to Pangkalan Bun as soon as the weather permits.

On Tuesday, search teams discovered debris from the plane and bodies some 10 kilometers from the location the plane was last captured on radar.

An official from Indonesia’s search and rescue agency, Hernato, said a sonar image over the site showed a large, dark object under the sea believed to be the missing passenger plane. The official added that the object is about 30 to 50 meters (100 to 165 feet) underwater.

The Airbus A320-200, belonging to Malaysia’s airlines, with 162 passengers on board disappeared on December 28 en route from Surabaya in Indonesia’s east Java to Singapore.

In the last communication from the cockpit to air traffic control, one of the pilots sought permission to climb from 32,000 feet (9,754 meters) to 38,000 feet (11,582 meters) due to the bad weather, which was not allowed because another plane was in the way.