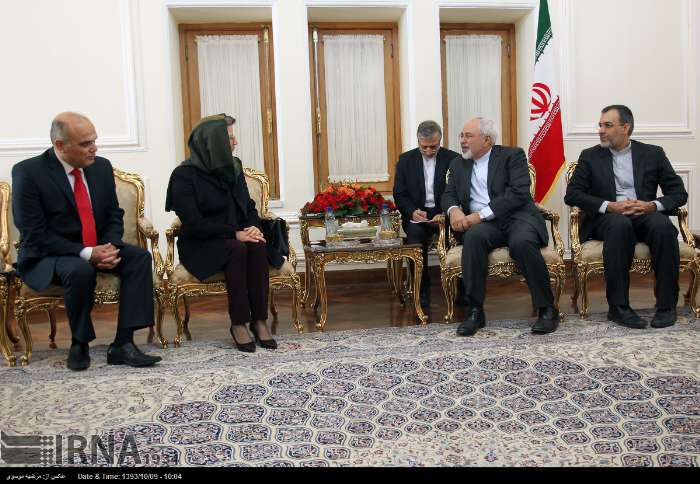 Tehran, Dec 30, IRNA – Foreign Minister Mohammad Javad Zarif said on Tuesday that resistance is the only way to retake rights of Palestinian nation.

He made the remarks in a meeting with visiting Tunisian Minister of Trade and Handicrafts, Najla Harrouche.

He expressed pleasure with the UN draft resolution to recognize the state of Palestine and said that resistance is the only way for the Palestinian nation to vindicate their legitimate rights and liberate the occupied territories of Palestine from the Israeli occupation.

The support made by Tunisia for Palestinian aspirations is praiseworthy, Zarif said.

On successful conduct of election in Tunisia, Zarif said this success achieved through collective contribution and solidarity of all the Tunisian people.

Referring to the danger of extremism and terrorism as a common pain for all countries in the region, he called for active and collective contribution of all governments in fight against such phenomena.

Expressing satisfaction over conduct of ‘Tunisian Cultural Week’ in Iran, he said the Islamic Republic of Iran attaches importance to expansion of relations with Tunisia and welcomes expansion of mutual and regional relations and cooperation.

Given scientific and industrial advancement of the Islamic Republic of Iran, he said Tehran is to put all its capabilities at the disposal of its friends in the region and is to broaden all-out cooperation with Tunisia mainly in transfer of new technological know-how, Zarif said.

Iran supports any policy or approach leading to restoration of tranquility and sovereignty of people and is to spare no efforts to this end, said the Iranian foreign minister.

She also underlined that Tunis backs Iran’s legitimate rights to benefit from peaceful nuclear energy and believes that the issue should be resolved only through political means.

On the issue of Palestine, she said Tunis has always backed Palestine and it is expected that all countries in the region to fully back Palestine.