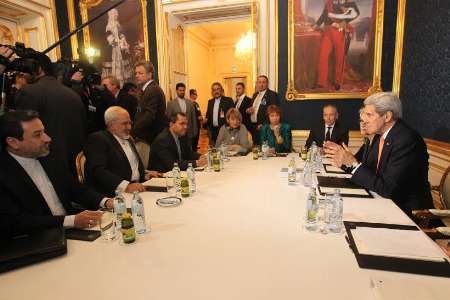 TEHRAN, Dec. 30 (Xinhua) — With the extension of the deadline for a comprehensive deal on Iran’s nuclear issue, the 12-year-long diplomatic efforts over Iran’s controversial nuclear program has come to a historical juncture.

In a recent letter to his counterparts of the P5+1 bloc — China, France, Russia, Britain, the United States and Germany, Iranian Foreign Minister Mohammad-Javad Zarif said Iran is confident that “a comprehensive agreement is imminently within reach.”

On Nov. 24, 2013, an interim deal, which included initial reciprocal measures to be taken by both sides for a duration of six months, was signed in Geneva, demanding that Iran suspend some sensitive nuclear activities in exchange for limited sanction relief to boost diplomatic efforts to resolve the issue.

Before the six-month deadline, Ali-Akbar Salehi, head of Atomic Energy Organization of Iran, said that Iran planned to drastically reduce plutonium output at the Arak heavy water reactor in a bid to dilute western doubts over the country’s controversial nuclear activities.

In July, Iran’s Supreme Leader Ayatollah Ali Khamenei said Iran’s uranium enrichment capacity was one of the major differences between Iran and the West.

Also in July, after months of intense talks, negotiators gave themselves four more months until Nov. 24 to strike a deal to scale down Iran’s nuclear activities.

In August, Iran said it had started to modify its Arak heavy water reactor and limit its plutonium output.

Foreign ministers from Iran and the P5+1 group agreed on Nov. 24 to extend the deadline of nuclear talks to July 1, 2015, in an attempt to secure the prospect of a deal.

On Dec. 17, a fresh round of the nuclear talks was held in Geneva at deputy foreign ministerial level without deals.

A recent report by the International Atomic Energy Agency (IAEA) said that Iran was continuing to meet its commitments under the Geneva interim nuclear deal as the country was not enriching uranium above 5 percent, and had not expanded its activities at its enrichment facilities and the Arak heavy water reactor.

However, IAEA Director General Yukiya Amano urged Iran last month to fully implement the practical measures agreed upon and cooperate with his organization in a timely manner.

“Iran has implemented most of the practical measures agreed under the framework, but not all of them,” said Amano, adding that the IAEA cannot conclude that all nuclear materials in Iran are for peaceful purpose.

Despite those doubts and criticism, Iran remains optimistic about the future of the nuclear talks.

“Although in the recent nuclear talks we could not finalize a comprehensive deal, I could say that forward steps have been taken in the run-up for a final agreement,” said Iranian President Hassan Rouhani after the extension in November.

The most important achievement in the talks was the common understanding that negotiations, rather than exertion pressure, are the only way to a final deal, he added.

The world powers have been convinced now that imposing sanctions to pressure Iran is not the right decision, and they have also accepted that Iran can enjoy nuclear technology, including the uranium enrichment program on its soil, he said.

Accomplishments always come with a price. When the negotiators gather under the same roof again next year, they will have to entertain the price they are willing to pay for a final deal.

The talks require “foresight, political will and recognition of realities by our negotiating partners as well as courage to make the right choice benefitting the entire global community rather than succumbing to the whims of vocal, but increasingly unpopular, pressure groups and special interests,” said Iranian Foreign Minister Zarif.