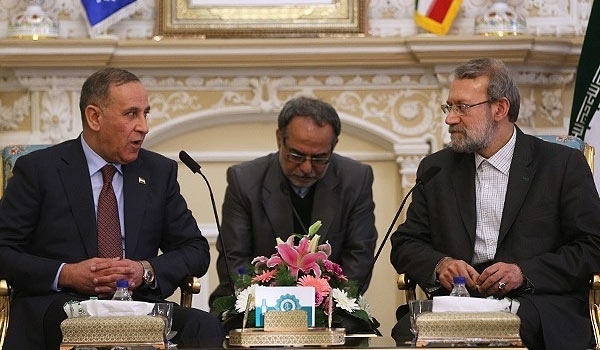 TEHRAN (FNA)- Iranian Parliament Speaker Ali Larijani in a meeting with Iraqi Defense Minister Khalid al-Obeidi in Tehran on Tuesday underlined that Tehran will continue helping Baghdad in its fight against Takfiri terrorists.

“Iraq is facing the ISIL problem and the Islamic Republic of Iran considers it as a duty to help its Iraqi brothers and it has remained beside the Iraqi government and nation and will continue doing so in future,” Larijani said during the meeting.

The Iranian parliament speaker voiced his pleasure in the consolidation of the national unity government in Iraq, and said, “Unity and empathy among all Iraqi tribes and groups will result in overcoming problems and moving towards development.”

Larijani reiterated that terrorism has been plotted by the big powers to strike a blow at the trend of development and democracy in Syria and Iraq.

He reiterated that Iran will continue its support for the Iraqi government and people in the campaign against terrorism.

The Iraqi defense minister, for his part, thanked Iran’s support for Baghdad and also the positive stances of the senior Iranian officials on Iraq, and said, “The Iraqi nation and government will always be thankful to Iran for its supports in different areas and these supports show the depth of the two countries’ relations.”

Yesterday in a meeting with General Dehqan in Tehran, al-Obeidi described Tehran’s growing military aid to Baghdad as a strategic necessity.

“Today, Iraq is engaged in fierce fighting in the three fronts of campaign on terrorism and corruption as well as reconstruction of the country, and we seek Iran’s assistance, support and partnership in these three fronts and have pinned much hope on the Islamic Republic of Iran’s positive role,” Obeidi said.

“We assume Iran’s increased support for the Iraqi armed forces as a strategic necessity,” he added.

Obeidi appreciated Iran for its help and military advice to the Iraqi army in the past, and said, “By visiting Iran, we underscore the Iraqi government, nation and armed forces’ determination to expand relations with Iran and we believe that developing ties between Iraq and Iran will benefit both nations.”