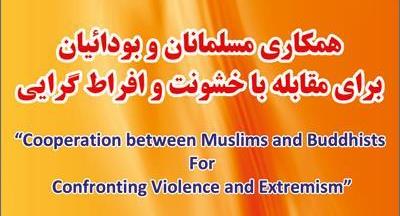 Tehran, Dec 29, IRNA — A forum titled “Cooperation between Muslims and Buddhists for Confronting Violence and Extremism” will be held on December 30 at the Islamic Culture and Relations Organization in Tehran.

According to ICRO’s public relations and information office, the interfaith dialogue will be organized by the Center for Dialogue among Religions and Civilizations.

Religious leaders and eminent intellectuals from Sri Lanka, Myanmar and Thailand as well as Iranian Muslim scholars will participate at the program.

The opening ceremony of the forum will be addressed by Ebrahim Abuzar Torkaman, chief of ICRO, Seyyed Mostafa Mohaqqeq Damad, head of the Islam Department of Iran’s Academy of Sciences, Hojat-ol-Islam Abul Hasan Navvab, president of the University of Religions and Denominations, Hassan Bulkhari, dean of the Faculty of Arts at Tehran University and Ali Mohammad Helmi, head of the Center of Dialogue among Religions and Civilizations.

“The role of religious leaders in development of spiritual and ethical virtues”, “Muslims-Buddhists cooperation; challenges and solutions” and “invitations in Islam and Buddhism to be moderate and avoid violence and extremism” are some of the topics to be discussed by the scholars.

The second day of the forum will be held on December 31 in the holy city of Qom.