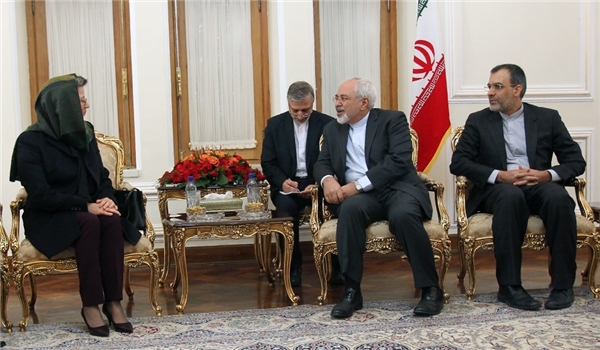 TEHRAN (FNA)- Iranian Foreign Minister Mohammad Javad Zarif underlined the country’s support for the settlement of problems in Libya peacefully and by a popular government.

“We support any solution which leads to tranquility and (the formation of a) popular government in Libya and will be ready for any assistance to this end,” Zarif said in a meeting with Tunisian Minister of Trade and Handicrafts Najla Harrouche in Tehran on Tuesday.

Elsewhere, he referred to the relations with Tunisia, and said, “Ties with Tunisia is highly valuable for the Islamic Republic of Iran and Tehran welcomes the development of such relations and cooperation at the bilateral and regional levels.”

Zarif also pointed to Iran’s considerable scientific and industrial progress, and said, “These capacities are at the service of all our friends in the region and we are ready for cooperation in all fields with Tunisia, including the transfer of new technologies.”

Iranian and Tunisian officials have underlined the necessity for making harder efforts to broaden bilateral ties.

A delegation of Tunisian businessmen traveled to Iran in October to study different ways of increasing economic and trade interactions between the two countries.

The commercial and economic delegation visited a number of industrial units of Alborz province, near Tehran.

Also in October, former Tunisian President Mohammad Monsef al-Marzuki in a meeting with Iranian Ambassador to Tunis Mostafa Boroujerdi underlined that his country was willing to expand all-out cooperation with Iran.