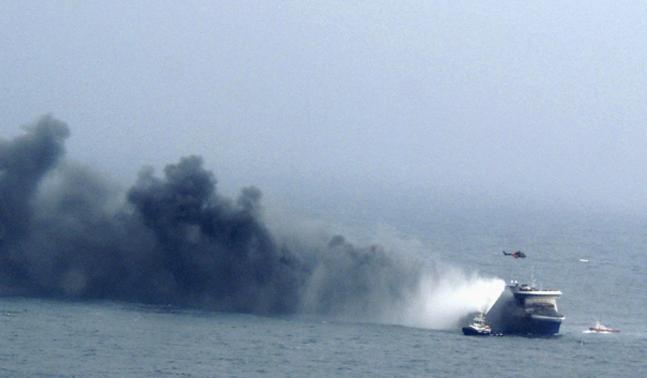 The car ferry Norman Atlantic burns in waters off Greece December 28, 2014 in this handout photo provided by Marina Militare.

(Reuters) – Rescue teams working through the night have pulled 265 people off a stricken car ferry which caught fire off the coast of Greece but more than 200 are stranded on board, the Italian navy said on Monday.

Helicopter crews have been slowly airlifting passengers from the upper deck of the Norman Atlantic, which caught fire in the early hours of Sunday and began drifting in rough seas between Greece and Italy.

A medical team and a flight operator are on the vessel to assist the 213 passengers and crew who remain aboard as the rescue continues, the navy said.

After initial rescue efforts were impeded by bad weather that prevented other ships nearing the multideck ferry, Italian and Greek helicopter crews began the difficult airborne operation on Sunday afternoon.

The operation is being coordinated from the Italian navy’s amphibious transport ship the San Giorgio, while the Norman Atlantic is towed to the southern Italian port of Brindisi.

One man was confirmed to have died on Sunday and there were four reported injuries. Several passengers have been flown to Galatina in southern Italy.

The Italian-flagged Norman Atlantic, chartered by Greek ferry operator Anek Lines, was sailing between Patros in westernGreece to Ancona in Italy carrying 478 passengers and crew and more than 200 vehicles when it caught fire.