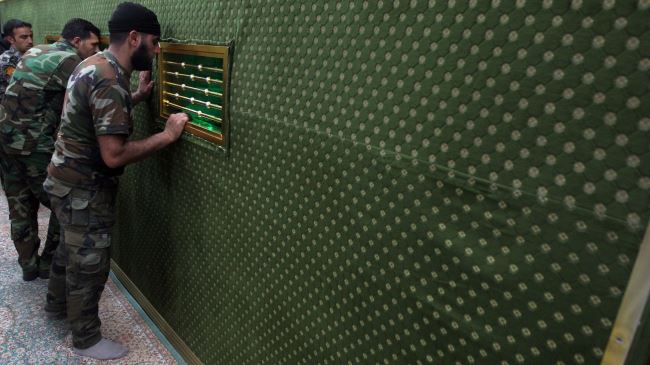 A funeral procession has been held for a senior Iranian military officer who lost his life in Iraq while on a mission to give consultation to Iraqi troops fighting the ISIL Takfiri terrorists.

The ceremony was held a in the Iranian capital, Tehran, on Thursday with military top brass and a number of senior state officials in attendance.

Brigadier General Hamid Taqavi was killed while on “an advisory mission” in the Iraqi holy city of Samarra, the Public Relations Department of the Islamic Revolution Guards Corps (IRGC) stated on Sunday.

His body will be transferred to and buried in his hometown in the southwestern Iranian city of Ahvaz on December 30.

The statement added that Taghavi was killed while conducting the mission in cooperation with the “Iraqi army and popular mobilization [forces] to counter the ISIL Takfiri militants in the vicinity of the shrine of (the eleventh Shia Imam) Hasan al-Askari .”

Samarra , located around 110 kilometers (68 miles) north of the capital, Baghdad, is home to the shrines of the tenth and eleventh Shia Imams, Ali al-Hadi and Hasan al-Askari.

Taqavi was a military commander during the 1980-1988 Iraqi-imposed war against Iran.

At the onset of the ISIL advances in Iraq, the Islamic Republic took rapid steps to mobilize popular forces in the country.

The Takfiri militants have been carrying out horrific acts of violence, including public decapitations and crucifixions, against all Syrian and Iraqi communities such as Shias, Sunnis, Kurds and  Christians.