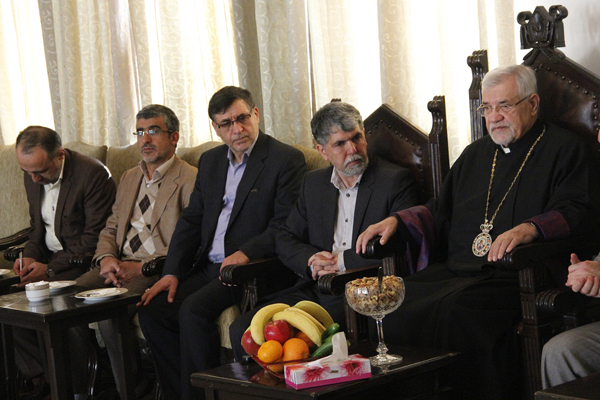 TEHRAN, Dec. 29 (MNA) – Ahead of New Year, cultural deputy of Culture and Islamic Guidance Ministry visited the Archbishop of Armenians this morning.

Seyed Abbas Salehi visited Armenian Church and Archbishop in Tehran and congratulated the arrival of New Year while pointing to the long history of coexistence of Iranians and Armenians and their well-intentioned relations.

Salehi said “Armenians have never been separated from Iranians and they have been beside us at the critical moments of Revolution and Sacred Defence.”

The official also highlighted the Islamic Republic’s approach on ethnic and religious minorities, stating that Islamic Revolution has always considered the minorities and praised Armenians for putting Iran’s national interests ahead of other issues.

Pointing to the activities of Office of Assemblies under his management as deputy minister, Salehi said the office tried to be a connecting bridge between Armenian society and the officials and would work to solve their problems; “our government also looks for unity among all groups and minorities in the society.”

Archbishop Sibuh Sarkisian, for his part, appreciated the efforts made by officials in solving the issues concerning Armenian and other religious minorities.