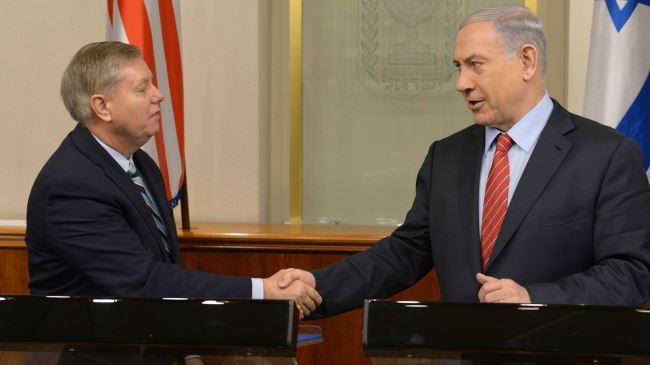 A US senator has threatened that Washington may withhold funding it provides the UN with over a planned vote by the UN Security Council on the Palestinian statehood bid.

Lindsey Graham, a staunch pro-Israel senator, claimed in a Saturday joint press conference with Israeli Prime Minister Benjamin Netanyahu in al-Quds (Jerusalem) that Congress would not “sit back and allow the United Nations to take over the peace process.”

Graham added that “any effort by the French, the Jordanians or anyone to avoid direct negotiations between the Israelis and the Palestinians over the peace process, anyone who tries to take this to the UN Security Council” will be met with “a violent backlash by the Congress that could include suspending funding to the United Nations.”

He told Netanyahu that Congress “has your back, in a very bipartisan way.”

The Republican Party now runs the House and the Senate, and things will be a bit different. But one thing will be constant: There will be bipartisan support for Israel, Graham added.

Chief Palestinian negotiator Saeb Erekat said on December 26 that the UN Security Council will vote by Monday on a draft resolution that calls for the recognition of the Palestinian state.

The draft, which was approved by the Arab League in September, sets 2016 as the date for a full Israeli withdrawal from the Palestinian territories.

The text is also expected to lay out a timeframe for negotiations on a final peace deal between Israelis and Palestinians.