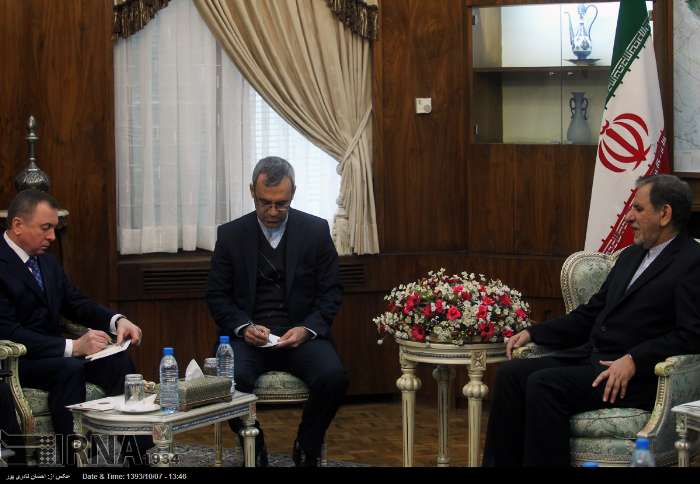 Tehran, Dec 28, IRNA – First Vice-President Eshaq Jahangiri said on Sunday that the western governments have imposed sanctions on Iran and Belarus to block the two nations’ road to economic development and progress.

Jahangiri made the remarks in a meeting with Belarus Foreign Minister Vladimir Makei.

On the occasion of Christmas and the new year Jahangiri wished success and prosperity for the Belarus nation and government.

He referred to Belarus as a friendly country, being a reliable partner and trustworthy for Iran and said Belarus is of high significance for Iran and Tehran welcomes all-out expansion of relations with Minsk.

Jahangiri said that Iran and Belarus have excellent, sincere and growing relations.

Jahangiri said relations between the two countries are growing in political and economic domains and the two sides need to make a serious move to augment their economic ties.

Emphasizing that Iran and Belarus should support each other in the international forums, Jahangiri said both countries should take effective steps in mutually concerned issues and exchange of delegates to prepare the ground for enhanced ties.

He said that Iran-Belarus Joint Economic Commission will be held in the near future.

Jahangiri said there are abundant grounds for mutual economic cooperation which should be utilized in cooperation with the private sector to expand bilateral ties.

He said sanctions would fail to impede Iran-Belarus relations.

Makei said for his part that his visit to Iran aims to explore grounds for expansion of bilateral ties and drawing up the prospect for promotion of economic relations.

He said that Belarus government’s stance on Iran will not change and Belarus will never downgrade level of its ties with the friends only to please the western governments.

He added that Iran and Belarus should focus more on bilateral economic ties so that their commercial and economic cooperation will improve in tandem with the political ties.