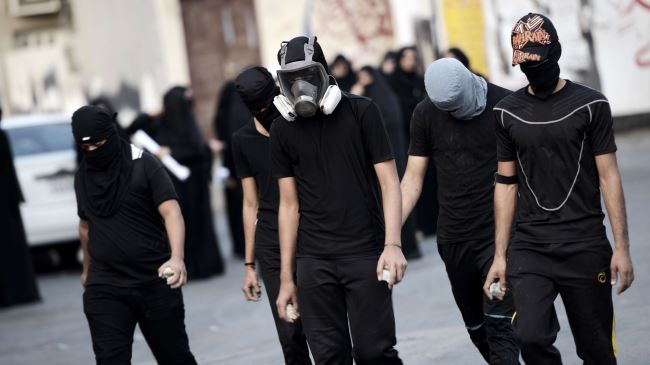 Bahraini protesters carry rocks in a clash with riot police during a protest against the parliamentary elections in the village of Sanabis, west of Manama, on November 22, 2014.

Al Khalifa regime forces have raided the houses of pro-democracy protesters in the Bahraini village of Sanabis, west of the capital Manama.

According to activists, security forces made a dozen arrests during their latest act of aggression against dissent in the Persian Gulf state.

The village has been surrounded by Manama regime forces since Saturday morning amid an escalation of demonstrations there.

The development comes as activists in several towns across the kingdom have blocked roads with burning tires despite the Al Khalifa regime’s heavy-handed crackdown.

On Friday, protesters poured into the streets of Manama and chanted slogans in condemnation of recent sham parliamentary elections in the country and the continued crackdown on political activists.

Bahrain has been the scene of almost daily protests against the Al Khalifa regime since early 2011 when a pro-democracy uprising began in the kingdom.

Since mid-February 2011, thousands of pro-democracy protesters have held numerous rallies in the streets of Bahrain, calling for the Al Khalifa royal family to relinquish power.

The regime in Bahrain has been severely criticized by human rights groups for its harsh crackdown on anti-government protesters, which has claimed the lives of scores of people so far.

On March 14, 2011, troops from Saudi Arabia and the United Arab Emirates were deployed to Bahrain to assist the Manama regime in its attacks on peaceful protesters.