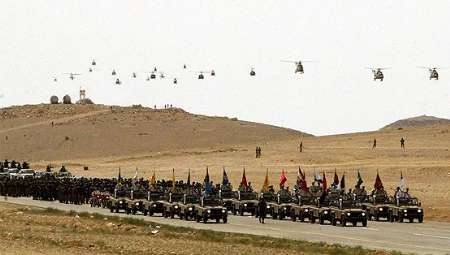 Mine planting vehicle used for 1st time in war games

The 2nd phase of Mohammad Messenger of Allah (P) war games began on Friday morning in the presence of the commanders of the Joint Chief of Staff and the IRI Army in a 2,200 square kilometer area expanding from the eastern water of the Strait of Hormuz to the 10 degree northern waters of the Indian Ocean and vast areas in Iranian southern and eastern provinces.

“We use our new achievements, including this mine planting vehicle that can plant mines in a vast area within a short period,” Said Major General Pourdastan in an interview with IRNA, here Friday morning.

He added that the Shaher sniper weapon that can target at objects three kilometers away, even at moving helicopters and armored vehicles, too, will be used in these war games.

The Army commander said that the six-barrel Moharram weapon, the Neynava tactical vehicle, and the Dehlavi anti-armor missiles, too, will be tested in these war games.

Major General Pourdastan added that the Toufan (Typhoon) anti-armor weapon that is mounted on helicopters, too, will be used in these war games.

The Army commander said that the IRI Army has used a small portion of its capabilities in these war games, including the Army’s improved helicopters equipped with night flight equipments and armed with advanced weapons.