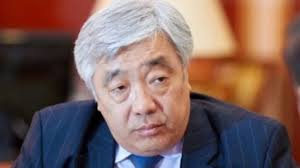 TEHRAN (ISNA)- Kazakhstan is interested in the speedy settlement of Iranian nuclear issue, the country’s Foreign Minister Erlan Idrissov said at a briefing in Astana.

“The settlement of Iranian nuclear issue in the shortest possible time is important for Kazakhstan, since this will have a positive impact on our region, first of all in terms of economic opportunities,” said Idrissov.

The foreign minister added that Kazakhstan is interested in the progressive development of the relations with Iran.

The minister expressed satisfaction with the development of the bilateral relations between the two countries. “We hope that the positive trend will continue in the future as well.”

Idrissov added that the shortest way to the world markets for Kazakhstan in the southerly direction passes though Iran. “This country is our important economic partner.”

The minister said that Kazakhstan wants to contribute to the successfulness of the negotiations on Iran’s nuclear program.

“We were somewhat disappointed that the group of negotiators failed to complete the negotiations held in November and hope that these talks will be more successful in 2015,” said Idrissov.

Idrissov reminded that Kazakhstan was a platform for two rounds of negotiations on Iran’s nuclear program, and these rounds gave a noticeable impetus to the positive development of the entire negotiation process, Trend News Agency reported.