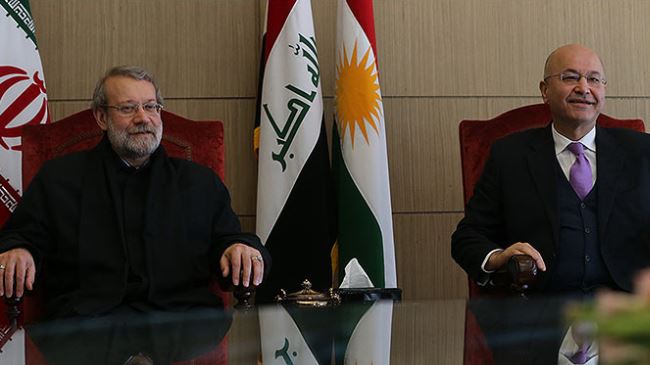 Iran is the most influential country in the Middle East, playing an effective role in settling regional issues, particularly the crises caused by terrorism, the deputy leader of the Patriotic Union of Kurdistan (PUK) Barham Salih says.

In a meeting with Iran’s Parliament (Majlis) Speaker Ali Larijani in the Iraqi city of Sulaymaniyah on Friday, Salih added that the Iraqi Kurdistan region has close relations and good cooperation with Iran in the fight against terrorist groups.

Salih hailed Iran’s support for Iraq in the battle against terrorism in the cities of Baghdad and Erbil and added that the country needs domestic and regional help in order to counter terrorist groups.

The Iranian Majlis speaker, for his part, reaffirmed the Islamic Republic’s full support for the Iraqi government and nation in the fight against terrorism.

Larijani, who arrived in Iraq early Tuesday on the last leg of a regional three-country tour, said Kurdistan plays an effective role in strengthening Iran-Iraq relations.

The ISIL terrorist group continues to control some parts of Syria and Iraq. The Takfiris have engaged in crimes against humanity in the areas under their control. The terrorists have mass murdered local civilians, captured army and security officers and terrorized people from diverse communities, including Shias, Sunnis, Kurds, and Christians.