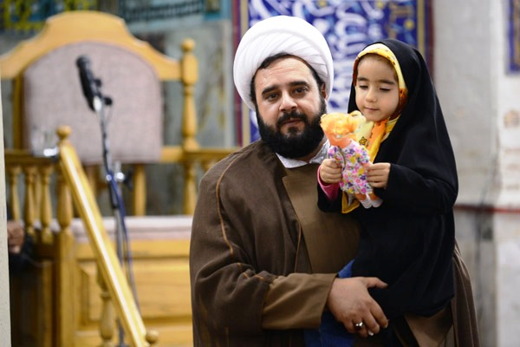 On December 22, Khorasan, a daily, ran a report on a recently-aired primetime TV series on Iran’s Channel One whose main characters were seminary students. The drama which had a high viewership raised questions among members of the public about how realistic the series was in depicting the lifestyle of seminary students. The following is a partial translation of what the daily carried about the series:

To get a better understanding of how seminary students live, we held an interview with Hojatoleslam Mohammad Javad Nezafat, the director of Hazrat Mahdi Seminary School which opened 36 years ago and has a lot in common with the seminary portrayed in the series.

“Seminary students lead a simple and unassuming life. Unfortunately, our younger generation only gets familiar with clerics through TV and political wrangling. Therefore it is unable to establish close relationships with them,” said Mr. Nezafat.

Recalling the movies made about the lifestyle of seminary students and clerics, he said, “Over the past two decades, remarkable efforts have been made. However, I believe that they are not enough. Movies like “Under the Moonlight”, “Gold and Copper” and “Pardehneshin” – a reference to those whose lifestyle might be a mystery to others – have tried to depict the lifestyle and concerns of a seminary student in a different manner,” said the top seminarian.

When asked as to what extent the series has succeeded in portraying the reality of a seminary student’s life, he said, “In many areas, the series has moved in the right direction, has not blown things out of proportion and reflected reality to a large extent. Although it has failed to depict the loneliness of the clerics who have utterly devoted their lives to efforts to appease God, by and large, it has been better than the previous movies.”

Stating that Iranians still have faith in clerics at heart, Hojatoleslam Nezafat added, “I think our people still have great confidence in clerics, but some misunderstandings and a lack of insight have caused others to think otherwise. In my opinion, both clerics and the public should take their share of the blame for the emergence of such misunderstandings. Nonetheless, one should not be unmindful of the role that our enemies have played.

“I hope TV movies which are made based on more in-depth research into the lives of seminary students will offer more insight into the role of clerics in society,” he concluded.

Also, we paid a visit to a seminary school which at first glance might not be similar to the one depicted in the series. There we came across young students who were busy with their books. There was also another group of students who had huddled to discuss local and international matters. What was interesting about their gathering was the evident bond between the seminary and high-tech products such as tablets and laptops.

In our chat with Mohammad, a seminary student, he said, “Seminary students live like ordinary people. I believe the picture presented of seminary students in some movies and TV series is divorced from reality. I should say clerics are depicted as individuals suffering from tunnel-vision.

“In our movies, clerics and seminary students are usually portrayed as people who only take part in congregational prayers or are in quest of spirituality. Whereas, we lead a normal life; we have fun and a sense of humor and we make mistakes like others. In some movies, we see that a seminary student does not have close relationship with his family at all or that he cannot communicate with strangers. However, the factual aspects of seminary students’ lives are something else.”

Seyyed Ahmad Abdollahi , who joined the seminary school after getting his first university degree, said, “Seminary students go through a lot in life. For instance, a student here has to do preliminary courses for ten years before taking advanced courses for another eight years. A seminary student’s life should be founded on simplicity and piety.”

He said, “In the series, a good image has been presented of clerics. However, I most like the progressive stages in the life of Baratali [a character in the series who is faced with the dilemma of accepting to work for his fiancée’s father, who is aging and has a small workforce, and carrying on his studies at the seminary and getting the clerical robe. Throughout the series, Baratali dedicates a great deal of time to helping his friends out of the problems they are dealing with. In practice, he cannot help the father of the girl he is in love with, nor does he frequently attend classes at the seminary school. His indecisiveness about his future coupled with his eventful life makes viewers interested in finding out what will come next]. I am of the opinion that the facts about the lives of seminary students can be explored through a look at Baratali’s life.”

Mohammad-Sadegh, another student at the seminary school, said, “Probably it is not known to the public what a difficult life a seminary student leads. Such difficulties include studying nonstop and living on minimum pay we get. It might strike you as surprising if I told you that some students are only paid around $165 a month after finishing a decade-long program here. I must say that it should not be viewed as a job; in fact it is a duty. ”

Translated by IFP from Khorasan Newspaper