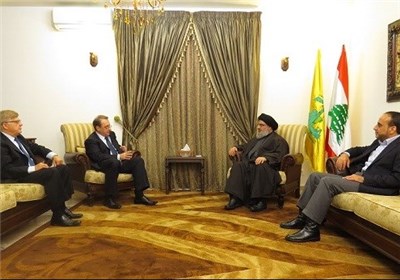 In his December 6 meeting with Russia’s Deputy Foreign Minister Mikh ail Bogdanov, Nasrallah reiterated support for Assad, regarding him as a red line and the emblem of unity in Syria, al-Akhbar daily said in a report in which it gave new details on the meeting.

“Bashar al-Assad has always been a leader of resistance but today, four years after the start of war (in Syria), he has turned into a symbol of unity and the axis of resistance,” the daily quoted Nasrallah as having told the Russian diplomat.

Nasrallah also highlighted Assad’s ability to lead Syria in the war against terrorism and his status among the forces of resistance in the region.

Syria has been grappling with a deadly crisis since March 2011. The violence fueled by Takfiri groups has so far claimed the lives of over 200,000 people.

The Syrian opposition and its Western supporters insist that Assad must step down and a transitional government be formed in Syria. However, Damascus has rejected the demand, arguing that the foreign-backed opposition does not represent the Syrian people.

The meeting between Nasrallah and Bogdanov in the Lebanese capital of Beirut earlier this month focused on regional developments, particularly Lebanon and Syria, media reports said at the time.

The senior Russian diplomat was accompanied in the talks by Russian Ambassador to Lebanon Alexander Zasypkin.

Hezbollah’s international relations officer Ammar Musawi also attended the meeting, reports said, but no other details about the meeting were released.