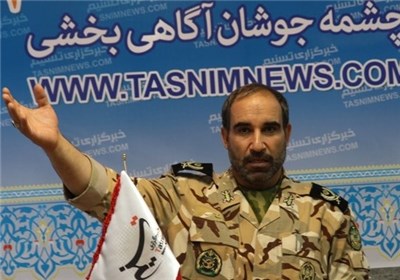 TEHRAN (Tasnim) – The Commander of Iranian Army’s Northeastern Headquarters said the military drills underway in the country carry message of peace and are aimed at eschewing Iranophobia in the region.

General Ali Jahanshahi said the wargame showcases the military might of the Islamic Republic of Iran and is focused on the country’s defense doctrine which is solely based on deterrence.

“Given its title which is named after Prophet Mohammad (PBUH), a symbol of unity, the maneuver poses no threats to the neighboring countries and is simply aimed at reinforcing the preparedness of the Iranian Army,” said the commander.

General Ali Jahanshahi reiterated that regional countries are capable of maintaining security in the Middle East and there is no need for the military presence of ultra-regional countries in the strategic region.

He also said the Iranian armed forces will immediately respond to any threats against the country.

Titled “Muhammad Rasullullah” (Muhammad, the messenger of God), the massive military exercises began with the participation of units from the Army’s Ground Force, Air Force, Navy, and Air Defense.

The Army’s wargame will continue for a week (until December 31) in a large area of 2.2 million square kilometers, stretching from the northern Indian Ocean (10 degrees latitude) to the Strait of Hormuz in the Persian Gulf and in the southern Iranian provinces of Sistan and Baluchestan and Hormozgan.

On the first two days of the drills, the focus will be on displaying the capabilities and agility of the Ground Force units in deployment, preparation and construction of defensive positions.