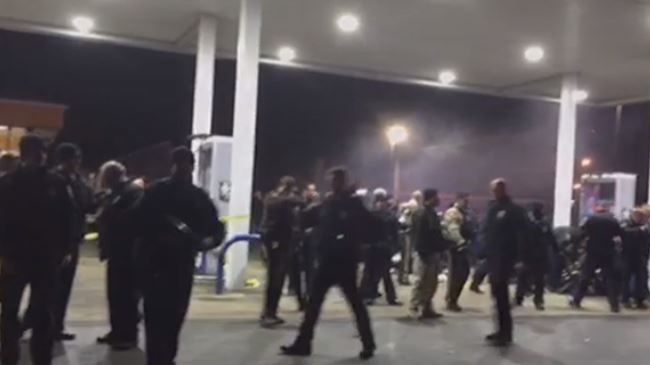 US police kill another black teenager in Missouri

Police at the Mobil gas station in Berkeley early Wednesday, Dec. 24, shortly after a fatal shooting.

Another African-American teenager has been shot dead by police in Saint Louis, Missouri amid ongoing protests against police brutality across the country.

The victim, 18-yaer-old Antonio Martin, was unarmed when officers fatally shot him at a gas station in Berkeley late Tuesday.

His mother, Toni Martin, and other witnesses said Antonio was shot by a police officer.

His mother said Antonio was with his girlfriend at the time of the incident.

In a statement, St. Louis County Police said Martin was shot after he pulled a gun and pointed it at officers as they approached him outside the gas station.

“Fearing for his life, the Berkeley officer fired several shots, striking the subject, fatally wounding him,” read the statement.

The shooting followed protests across the United States over the police killings of black men and grand juries refusal to indict involved officers.

The decision triggered anger among people who held demonstrations in Milwaukee, Wisconsin, on Tuesday.

Missouri has also been the scene of angry protests since another white police officer Darren Wilson was cleared for the killing of unarmed African-American teenager Michael Brown in August.

Protesters and human rights activists described Brown’s killing as an example of the excessive use of force and racism in law enforcement in the United States.