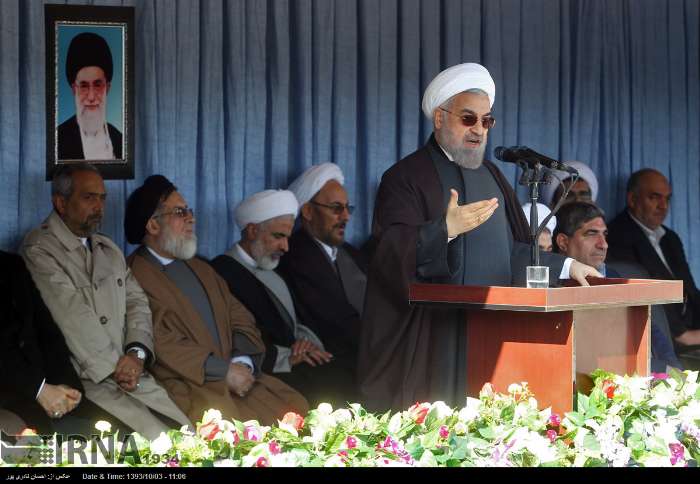 Rouhani says recession over in Iran

BIRJAND, Dec. 24 (MNA) – During his eleventh provincial visit to Birjand, Southern Khorasan Province, President Rouhani has announced the start of economic growth in Iran after two years of recession.

Speaking among citizens of Southern Khorasan on his eleventh provincial visit, President Rouhani highlighted his government’s achievements during the past two years since his election and said, “the two great issues that the government has been grappling with were the inflation and the recession. We have now finally managed to reduce the 40 percent inflation down to 17 percent.”

“The country’s economic growth was minus 6.8 two years ago, but the statistics issued by the Central Bank last night showed a four percent positive growth during the six months of the current [Iranian] year,” he added, hailing the start of economic growth in Iran after two years of recession.

President Rouhani also maintained that the government had paid 94 percent of the provincial development budget, which has been unprecedented compared to previous years.

While asserting that Iran has had some noteworthy accomplishments in the field of oil and gas this year he said, “by the end of February 2015, 100 million cubic meters of gas will be added to our daily gas production.”

Rouhani referred to the drop in oil prices and said, “the current global situation as well as some countries’ plots have led to the fall in oil prices; however, this will not remain so and we will be able to overcome these problems with the help and efforts of our people.”

Addressing the cabinet meeting earlier this December, President Rouhani had stressed that the oil price drop was a ‘plot against the regional people and Muslims’ which only benefited some other countries.

Oil prices have continued a downward trend during recent months over concerns about global economic recovery and strength of US dollar which makes crude more expensive for international investors.

Meanwhile, analysts say Saudi Arabia’s decision to reduce crude prices is part of a US scenario to harm the economies of countries such as Russia, Iran and Venezuela which have drafted their national budgets based on the price level of USD 100 per barrel.