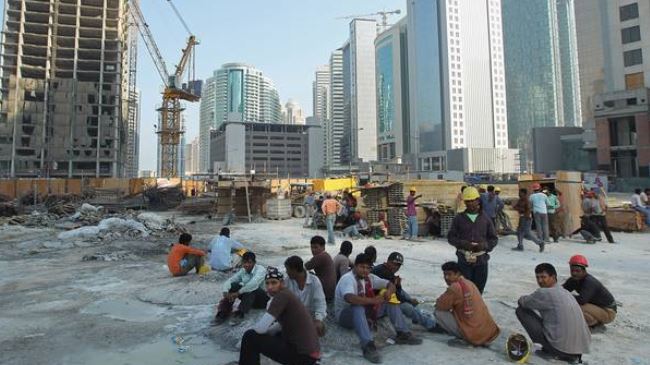 Mistreatment of migrant workers in Qatar, such as late or non-payment of wages, poor-quality accommodation and prohibiting changing jobs or leaving the country, has led to severe criticism by human rights groups. (File photo)

Criticism of Qatar’s abuse of foreign laborers continues to make headlines amid new reports of a high death rate among the migrant workers involved in building the country’s infrastructure to host the 2022 World Cup.

The Nepalese migrants engaged in the project in the Persian Gulf Arab country “have died at a rate of one every two days in 2014,” British daily The Guardian reported Tuesday.

Deaths are also reported among other migrant labor forces in Qatar, including among those from India, Sri Lanka and Bangladesh.

According to the report, if fatalities among all migrant workers involved in Qatar’s World Cup preparation project were factored in, the overall labor death toll would probably be even more than one per day.

The development comes, the report added, despite Qatar’s pledges of improving the working conditions for migrant workers. Qatar had vowed to reform the situation after growing criticism of its labor policies, commissioning an investigation by the international law firm DLA Piper.

Human rights organizations have, however, accused Qatar of dragging its feet on making improvements, insisting that not enough is being done to probe the consequences of working long hours in persistently high temperatures, which reach even above 50 degrees C.

“We know that people who work long hours in high temperatures are highly vulnerable to fatal heat strokes; so, obviously these figures continue to cause alarm,” said Nicholas McGeehan, the Middle East researcher at Human Rights Watch.

“It’s Qatar’s responsibility to determine if deaths are related to living and working conditions, but Qatar flatly rejected a DLA Piper recommendation to launch an immediate investigation into these deaths last year,” McGeehan said.