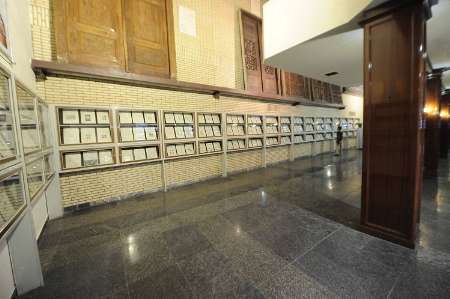 Mashhad philately collection one of the richest

Tehran, Dec 23, IRNA — Postage stamps made from textile and thin sheets of wood; and stamps with pictures and smell of fruits! These are part of the rich philately collection at the Libraries, Museums and Documents Center of Astan Quds Razavi in Mashhad in Khorasan Razavi Province, says Mohamad-Hussain Yazdinejad, head of the stamps, coins, and bills collection.

In an area of 400 square meters, the museum holds an invaluable array of 300,050 stamps, including 50,000 Iranian and foreign stamps on display. This is along with currency bills and coins from different eras of Iranian history, as well as contemporary bills from 50 foreign countries, Yazdinejad said while introducing the special aspects of the museum’s stamp collection to IRNA on Thursday.

“The stamp section accommodates the world’s first adhesive postage stamp used in the public postal system, which was issued by Britain in 1840. Also the first Iranian stamp and the world’s first postal envelope are part of this interesting collection. There are also stamps in different shapes: circular, triangular, hexagonal, octagonal, and also in the form of relief – payment made by a male feudal tenant to his lord on succeeding to an inherited estate – from different parts of the world.”

The most prominent feature of Astan Quds Razavi Museum is that most of the precious and interesting artifacts were donated by Iranian and foreign individuals and organizations, Yazdinejad said, according to Financial Tribune Daily.

In operation since 1990, the collection of stamps, bills and coins is annually visited by hundreds of thousands of Iranian and foreign tourists and pilgrims to Imam Reza (AS) shrine in Mashhad, and is one of the richest collections in the Middle East.

Astan Quds Razavi Central Museum came into operation hundreds of years ago, when devotees of Imam Reza endowed many precious gifts to the shrine. Over the years, many of the gifts were sent to storage facilities in the Astan Quds library. Due to the high volume of historical and precious artifacts that were collected over hundreds of years, it was decided that a separate museum should be built. With the assistance of historians, various items were selected for display and in 1945 Astan Quds inaugurated what is now referred to as the Old Museum.

Later, the Old Museum was moved to a new building in Imam Khomeini courtyard after the Islamic Revolution, and it was expanded significantly. It is now referred to as the Central Museum of Astan Quds.

Astan Quds Razavi is an autonomous charitable foundation which manages the Imam Reza shrine and various institutions belonging to the organization.

Next to the central museum is another building that houses other museums, with collections of Qur’ans, carpets, etc.