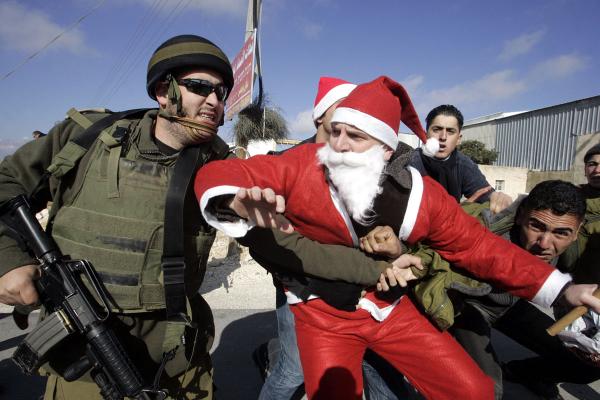 Demonstrators marched to the Israeli military checkpoint in northern Bethlehem to celebrate Christmas and hand out gifts to children in the area.

IOF prevented the demonstrators, some of whom were dressed as Santa Claus, from reaching the checkpoint and fired tear gas at the crowd.

Mazen al-Azza, an activist with the Palestinian National Initiative, told Ma’an news agency that the march had a peaceful Christmas message, but “Israeli soldiers did not miss the chance to suppress it by assaulting journalists and peaceful demonstrators.”

Israel announced earlier this week that several restrictive measures were to be taken to permit the movement of Palestinian Christians during the Christmas holiday season.

Israeli Coordinator of Government Activities in the [Occupied] Territories Yoav Mordechai said several measures are to be implemented until January 19, when the final Christmas date celebrated in Palestine – Armenian-Palestinian Christmas – will bring the season to a close.

Mordechai said that Palestinian Christians living in the West Bank will be given long-term permits for travel into Occupied Palestine during the holiday season, although no specific number was announced.

He also said that 700 Palestinian Christians from the Gaza Strip, either younger than 16 or older than 35, will be allowed into Occupied Palestine and the West Bank.

500 Palestinian Christians from the West Bank will also be allowed to visit immediate family in the Gaza Strip, while 200 others will be given permits to travel through Ben Gurion airport, which is normally restricted for Palestinians.

According to CIA statistics, 123,000 Palestinian Christians live in Occupied Palestine, and another 226,000 reside in the West Bank and the Gaza Strip.

Israeli forces maintain severe restrictions on Palestinians’ freedom of movement between the West Bank, Gaza Strip, and Occupied Palestine through a complex system of permits.

The discriminatory system has turned Gaza into an open-air prison with over 1.8 million Palestinians rarely given permits to leave the besieged strip.

Similarly, Palestinians in the occupied West Bank are not allowed to visit Occupied Palestine except during religious holidays.

Palestinians with Israeli citizenship are able to travel across the Israeli occupied territories as well as the West Bank but not into Gaza, while Palestinian refugees who do not fall under Israeli rule are almost completely denied access to Occupied Palestine and the West Bank but can, theoretically due to the siege, enter Gaza.

Moreover, even Palestinian movement within the West Bank is regulated through a racist system which includes a complex combination of fixed and flying checkpoints, roads exclusively open to Zionist settlers, a public transportation system restricted to non-Palestinians, and many other obstructions.

In February, Israel’s Knesset passed a bill differentiating Christian Palestinians from the rest of the Palestinian community which remains within the 1948 territories.

Arab members of the Knesset unanimously condemned the bill as a “racist” act and a “divide-and-conquer” tactic.

Despite MK Yariv Levin’s contention that Israel is the only place that allegedly “protects” Christians, churches in the West Bank are regularly targeted by “price tag” attacks, a term Zionists use to describe hate crimes against Palestinians.