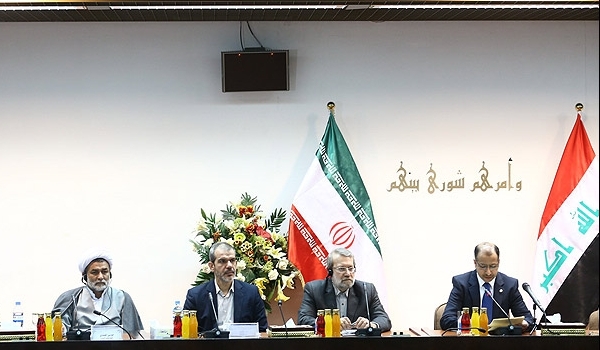 TEHRAN (FNA)- Iranian Parliament Speaker Ali Larijani called on Iraq to enhance its cooperation with Tehran in the oil and gas sectors, specially at a time when the enemies of both nations have hatched plots to further decrease crude prices.

“Oil and gas cooperation between Iran and Iraq is highly important, specially regarding the recent mischief of certain countries for decreasing the oil price and the damages inflicted on the Iraqi government and certain exporting countries,” Larijani said in a meeting with a number of Iraqi parliamentarians in Baghdad on Wednesday.

He also underlined Iran’s enthusiasm for the further expansion of relations with Iraq in different political and parliamentary fields.

Larijani described the perspective of Iraq’s situation as positive, and said, “Certainly hardship makes nations stronger and is a practice to know the real friends in the region and therefore, such a capacity will change the regional conditions and certainly Iran will help Iraq in fighting terrorism.”

Iran and Iraq enjoy close relations and contacts in the energy sector.

The meetings were held on the sidelines of the ministerial meeting of the Gas Exporting Countries Forum (GECF) in Tehran.

The focus of the meetings was energy cooperation between Iran and the three countries.