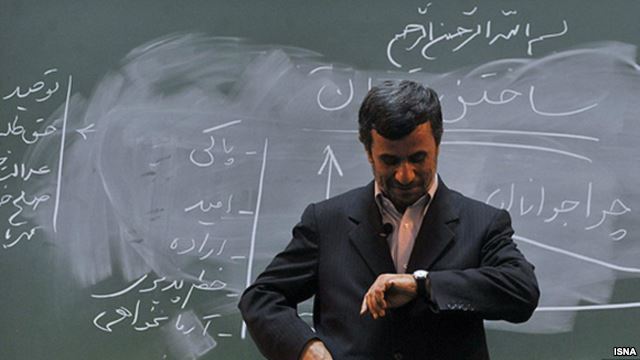 With Iranian politics in a slower period during religious holidays, former President Mahmoud Ahmadinejad has stepped into the space to fuel rumors of his comeback.

Ahmadinejad, who stepped down amid widespread criticism in 2013, appeared with political allies at a commemoration ceremony for Prophet Mohammad in Kashan.

Ahmadinejad’s former spokesman Gholam-Hossein Elham and Tehran Province Governor Morteza Tamaddon were among those in attendance. Tamaddon declared that the crowd was chanting in support of the former President and asking for his return to politics.

Some of Ahmadinejad’s supporters in Parliament are linked to the Endurance Front, the hardline faction which is challenging the Rouhani Government. Rumors claim Ahmadinejad and the Front may link up for Parliamentary elections in 2016.

One former member of the Ahmadinejad Cabinet was not so keen on the prospect. Former Welfare Minister Parviz Kazemi said, “Inshallah, Ahmadinejad never returns to politics….He has disgraced the Principlists.”

President Hassan Rouhani has praised a pro-regime rally in December 2009 that tried to check the protests after the disputed Presidential election.

Rouhani said the “9 Dey” demonstrations on December 30, 2009, were “the bond between the people and the Guardianship” of the regime.

The 9 Dey marches came three days after protests on the religious day of Ashura posed a serious challenge to regime authority, pushing back security forces and Basij militia.

The President also praised the Supreme Leader for his guidance during the 2013 presidential elections.

Gholam Ali Haddad Adel, a member of the Supreme Leader’s inner circle, has said that 15 university courses such as Social Sciences, Political Sciences, and Economics must be fundamentally changed.

Haddad Adel said the courses are in contrast with the culture of the Islamic Revolution, as they are consistent with Western culture.

Hardliners in Iran have called for the “Islamicization” of the university curriculum, going as far as to ban disciplines in the social sciences and humanities.