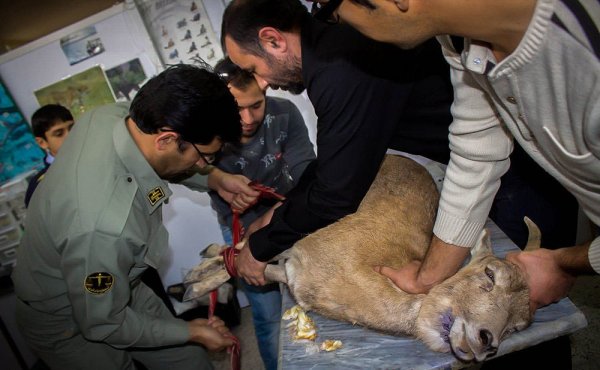 If it weren’t for the swift action of people and environment officials, the animal would have definitely died from its injuries.

On December 19, Khabaronline filed a report on saving by park rangers in a village near Shahrud, a city in Semnan Province, of a two-year-old wild goat which suffered severe wounds after being attacked by a wolf. What appears below is a partial translation of the report accompanied by a photo gallery:

“Right now, the wild goat is in good condition. The goat was wounded in the throat and immediately taken to Sharud for treatment,” said Mohammad Reza Ghasemi, the head of the Public Relations Office of the Environment Protection Department of Shahrud.

“The wild goat will be taken care of for about 10 days at the Environment Protection Department and then will be released in nature,” Ghasemi added.

The veterinarian in charge of treating the goat said, “If it weren’t for the swift action of people and environment officials, the animal would have definitely died from injuries.”