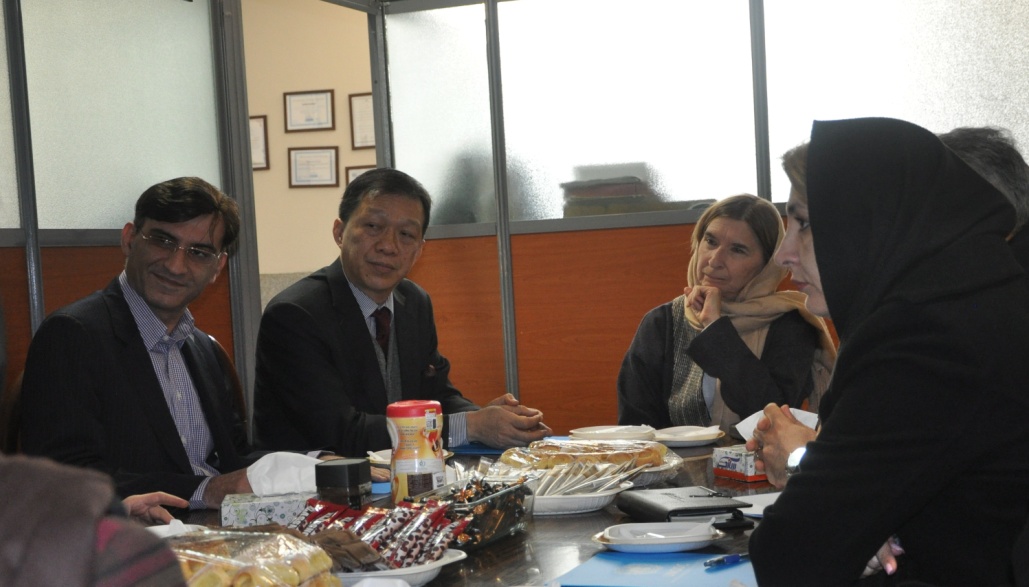 H.E. Ambassador Norheim (centre), with Mr. Boonwaat and Mr. Deilamizadeh to her right

UNODC Iran and the Drug Control Headquarters (DCHQ) organized a visit for H.E. Ms. Aud Lise Norheim, the Norwegian Ambassador to the Islamic Republic of Iran, to the Women Drug Therapeutic Centre located in Chitgar area of Tehran, which is affiliated with the Iranian Non-Governmental Organization (NGO) Rebirth Society and provides treatment and rehabilitation services to women drug users.

The visit included briefings on the work of the Centre and the various activities of Rebirth Society in the fields of prevention, treatment, and harm reduction, followed by a visit to different parts of the Centre, which includes departments of psychology and counselling, social work, and medical care, in addition to art training which is provided by a specialized team, and weekly educational courses for the families of the clients.

Accompanied by Mr. Leik Boonwaat, UNODC Representative in Iran, H.E. the Ambassador had the opportunity to listen to the personal stories of two recovered drug users benefitting from the services of the Centre. H.E. warmly expressed her appreciation for the courage of these women in sharing their personalexperiences and touching stories with the delegation. She also expressed her appreciation for the efforts of Rebirth Society, specifically in Chitgar TherapeuticCentre, as well as the continued support of UNODC. In particular, she thanked UNODC Iran and DCHQ for providing this valuable opportunity for becoming directly familiar with the good practice set by this Centre.

Mr. Abbas Deilamizadeh, Director of the Rebirth Society, briefed the delegation on the various activities of the NGO, which was founded in 1999 by a group of recovered drug users with minimum facilities and continued growing to more than 100 centres around the country within several years.

Active in the areas of drug and HIV prevention, treatment, and care, t he NGO was granted the Vienna Civil Society Award in 2005 by the Municipality of Vienna and UNODC. In 2006 the Rebirth launched a one-year training course on chemical dependency for counsellors, and currently many of the 1000 counsellors who have graduated from this course are providing services in drug treatment and harm reduction throughout the country.

Since 2012, the NGO started to make substantial numbers of service centres independent in order to remain more dynamic and is now focusing on capacity building and advocacy for change of attitude in the society. According to Mr. Deilamizadeh, the organization helps thousands of drug users every year to move away from drug use and facilitates the process of their reintegration into the society, and many drug users are encouraged to enter the rehabilitation programmes thanks to the use of a peer approach.

Mr. Deilamizadeh also referred to the crucial role played by the Rebirth Society in establishing a network of Drug Demand and Harm Reduction NGOs in West and Central Asia following the “Second Regional Consultative Meeting towards Networking of Drug Demand and Harm Reduction NGOs” in Tehran, which was supported by the UNODC Iran segment of the Regional Programme for Afghanistan and Neighbouring Countries and the DCHQ in February 2014. He highlighted the support received from UNODC throughout the activities of Rebirth and expressed his appreciation to the Office.

Ms. Atefeh Hamzeh, Head of the Chitgar Therapeutic Centre, gave the delegation a comprehensive briefing on the background and activities of the Centre, which had been opened in 2010 in response to rising needs to provide therapeutic services to the increasing number of women using Amphetamine-Type Stimulants (ATS).

The clients of the Centre are mainly women with ATS use problems referring to the centre on a voluntary basis, and most of them are between 20 and 35 years of age. Ms. Hamzeh explained that the main reasons of drug use among these women are having drug-dependent spouses and achieving physical fitness. The cost of treatment is covered in three ways: the client herself, the State Welfare Organization subsidy, and a small percentage covered by the Rebirth Society for those with limited or no income.

It is worth mentioning that in 2014, Ms. Hamzeh was among a drug treatment team who obtained a formal training on Behavioural Drug and HIV Risk Reduction Counselling (BDRC) under Sub-programme 2 “Drug Demand Reduction and HIV Control” of the UNODC Country Programme, through gracious funding by the Kingdom of Norway. The training was jointly organized by UNODC Iran and the Universiti Sains Malaysia (USM) in Penang. Currently, Ms. Hamzeh is implementing BDRC at the Rebirth Society’s outpatient clinics, following-up with the clients of the Chitgar Therapeutic Centre.