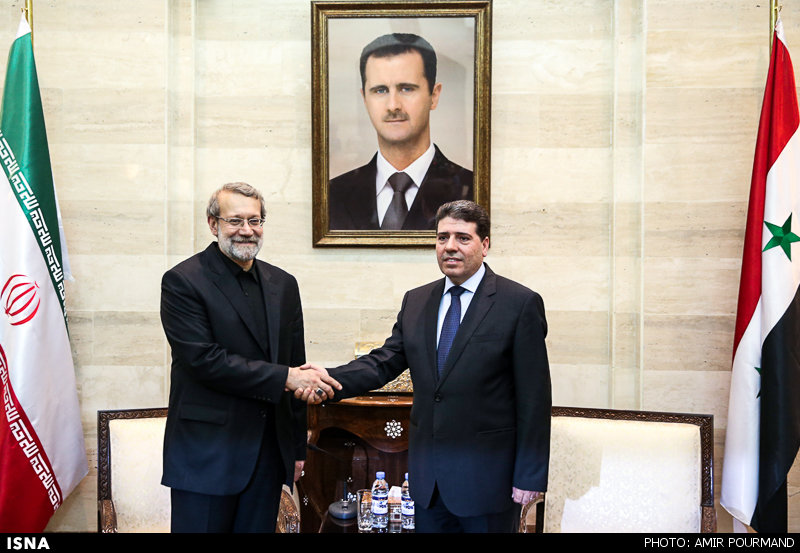 Damascus, Dec 22, IRNA – Majlis (parliament) Speaker Ali Larijani, who is in Damascus, said terrorism in Syria and Iraq is a ‘regional problem’, adding that countries which support terrorist groups are making a big mistake.

In a meeting with Syrian Prime Minister Vael al-Halqi here on Sunday afternoon, Larijani said Iran considers Syria problem a vital issue for the whole region and believes that solution of the problem is now more necessary.

Larijani said the enemy intends to ruin roots of resistance in the region, so Iran’s support for Syrian nation is noticeable in this concern.

Syrian premier, for his part, by explaining situation in his country, appreciated Iran’s supports for Syria.

Referring to old and strong ties between Iran and Syria in many fields, al-Halqi said that guidance of the Supreme Leader of Islamic Revolution made closeness of thoughts of both leaders of the two countries possible.

Already, Larijani had meetings with President Bashar al-Assad and his Syrian counterpart Mohammad Jihad al-Laham and attended a joint press conference with him.

In the first leg of his regional tour, Larijani arrived in Damascus on Sunday morning heading a high ranking delegation including Foreign Ministry officials and parliamentarians.

Larijani regional tour will also take him to Lebanon and Iraq.