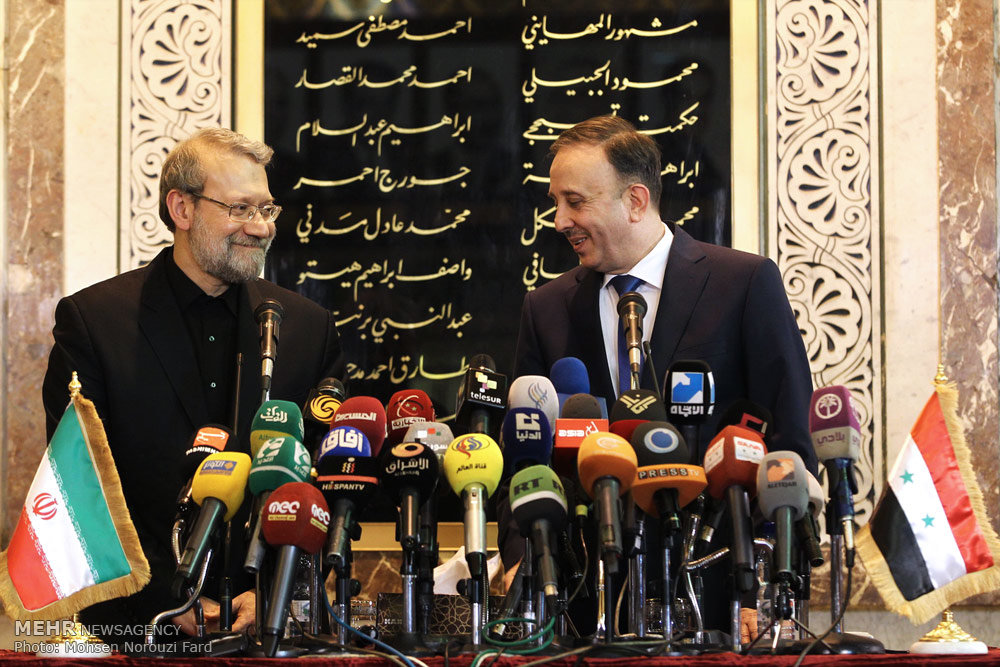 Larijani: States plotting oil price fall not to be forgotten

Iranian Parliament Speaker Ali Larijani who was visiting Damascus as the first leg of his regional tour held a joint press conference with his Syrian counterpart Mohammad Jihad al-Laham and pointed to the anti-Israel position of Syria as “one of leading countries in fight against Israel, particularly at a time when some regional countries were playing possum.”

He said Syria has been the front line in fight against the Israeli regime and highlighted their sacrifices during conflicts in last decade including 22-day and 33-day wars as ‘unforgettable.’

Larijani slammed some countries in the region for their silence during those wars and said “many countries that are now giving lip service and claim fight against the Zionist regime, were keeping silent during 33-day war and some of them even supported the Israelis.”

Larijani deemed the current crisis is the price Syria is paying for resisting against Israel and dubbed it the reason for Iran to stand by Syrian government and people. “This support does not mean there is no problem in Syria; there have been some mistakes which need to be amended. Democratic problems cannot be fixed by weapons though.”

Iranian Parliament speaker stated that during the four years Syria has been dealing with terrorism it was revealed that by terrorists attacking Iraq, which had no problems in terms of democracy, their claims for democracy were merely pretext for war mongering and Iran had said it from the very beginning.

“We have repeatedly told the countries who support terrorists that they would not be able to control them in the future. Now the important question is why any country in the region where the US and western states have intervened has been the birthplace for terrorist groups? It has been such in Afghanistan, Syria and Iraq.”

Larijani stressed on unity among Muslims and referred to Imam Khomeini’s views on brotherhood of all Muslim and expressed hope the recent developments in the region would benefit the Islamic Ummah by increasing unity and integrity among Muslims.

Iranian official criticized some certain countries for hypocritically claiming support for a political solution to Syrian issue and emphasized that both political and military measures needed to be taken in Syria.

Ali Larijani also touched upon the declined oil prices and noting that Tehran and Damascus shared similar approaches in this regard, assessed it another mistake that some believed oil prices could be exploited as a lever to change strategic issues in the region.

He asserted that Iranians had survived much more difficult situations, particularly during eight years of imposed war when Iran’s oil was only some 7-8 dollars, “but this time we will not forget which countries made conspiracies in reducing oil prices.”