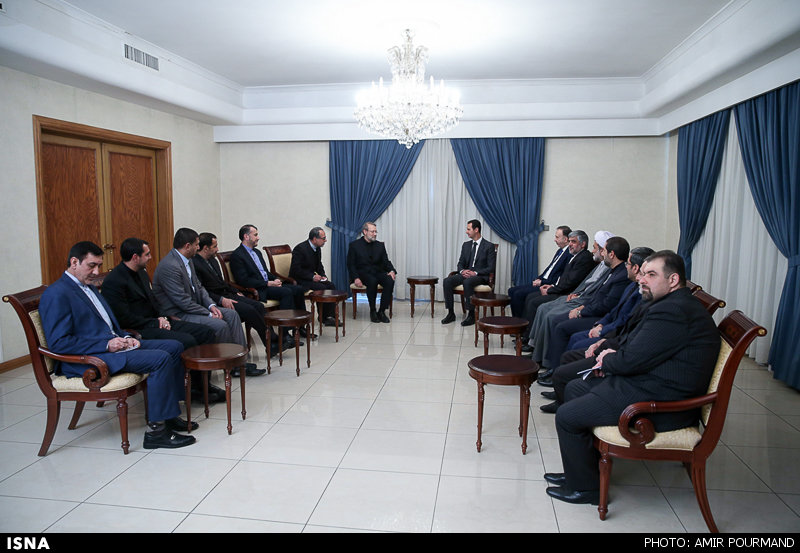 Iran’s Parliament (Majlis) Speaker Ali Larijani says Tehran will continue to fully support the Syrian government in its battle against terrorism and efforts aimed at helping the success of national dialog in the Arab country.

“The Iranian government and nation are standing by the Syrian people and are prepared to expand all-out cooperation with the Syrian government in order to establish regional stability and security,” Larijani said in a meeting with Syrian President Bashar al-Assad in Damascus on Sunday.

He added that the Syrian government’s efforts to safeguard the country’s territorial integrity and counter terrorists should be appreciated.

Since the outset of the crisis in Syria, Iran believed that the developments in Syria were aimed at spreading terrorism, violence and instability in the region, the Majlis speaker said.

Syria has been grappling with a deadly crisis since March 2011. The ISIL terrorists, who control parts of Syria and Iraq, are engaged in crimes against humanity in the areas under their control.

More than 200,000 people have been killed so far in the conflict in Syria, according to UN High Commissioner for Human Rights Zeid Ra’ad Zeid al-Hussein.

The Syrian president, for his part, said his government is keen on uprooting terrorism and extremist ideology while working on reaching national reconciliation at the same time.

Assad added that Iran and Syria have managed to resist many problems and succeeded in foiling plans of the enemies and terrorists.

He emphasized that Damascus is ready to boost cooperation with Tehran in an effort to fulfill the two sides’ interests and improve security across the Middle East.