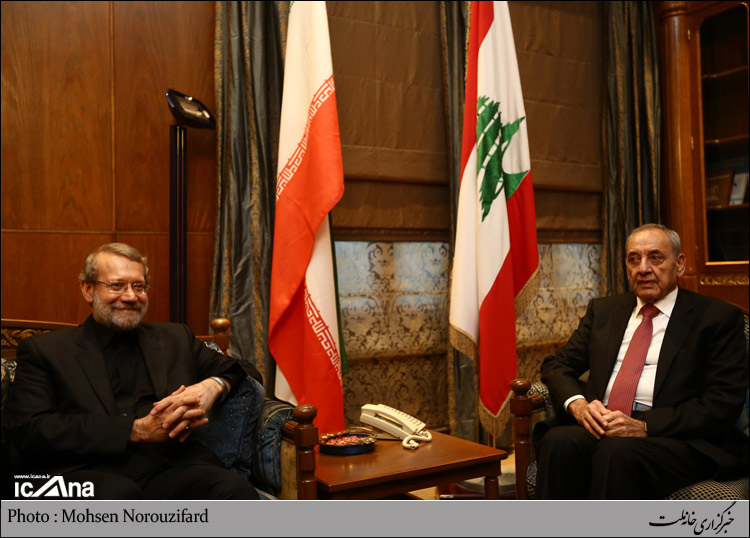 “Political talks can be a good beginning for the settlement of Lebanon’s woes, which are of a Lebanese and domestic nature and should be resolved by the Lebanese themselves,” the Iranian Majlis speaker added.

He emphasized that Lebanese officials and figures are vigilant about settling their country’s problems.

The first round of talks between Mustaqbal, led by former Lebanese Prime Minister Saad Hariri, and Hezbollah are set to be held at Berri’s Ain al-Tineh residence. The exact date of the dialog has not been determined yet.

Larijani said he had raised important regional issues, particularly operations by terrorist groups, with his Lebanese counterpart in the meeting before the banquet.

“I believe that all sides thinking about resistance should always bear in mind two important issues, namely, the fight against Takfiri terrorism and the Zionist regime (Israel) which are the two sides of the same coin,” the Iranian official stated.

He called for political and security approaches to the battle against Takfiri terrorists in the Middle East.

Larijani arrived in Beirut on Monday on the second leg of his three-nation tour which will also take him to Iraq. On Sunday, he visited Syria and held talks with senior officials of the country.

The ISIL terrorists control some parts of Syria and Iraq. They are engaged in crimes against humanity in the areas under their control. They have terrorized and killed people of all communities, including Shias, Sunnis, Kurds, and Christians.Vrorist attacks by al-Qaeda-linked militants and random rocket attacks, which are viewed as a spillover of the conflict in neighboring Syria.