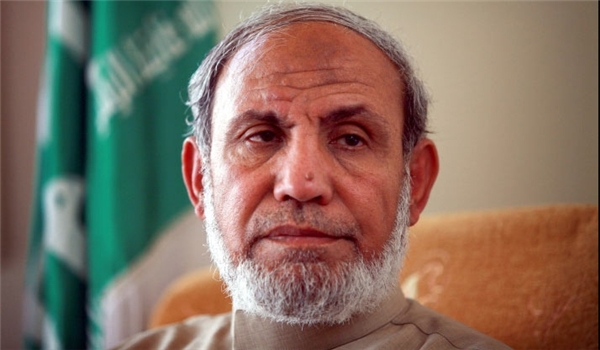 Hamas stresses consolidation of ties with Iran irrespective of pressures

TEHRAN (FNA)- Senior Hamas official Mahmoud al-Zahar stressed the necessity for strengthening bilateral relations with Tehran, and said the resistance group would never be coaxed into darkening these ties for short-term interests.

“Reinvigoration of ties with Tehran is necessary for strengthening the resistance and is considered as a step towards the materialization of the Palestinian cause,” Zahar told FNA on Monday.

He criticized the displeasure expressed by certain Arab states in the close relations between Iran and Hamas, and asked them to avoid pressuring the resistance group to make it adopt positions which are harmful to its interests and the Palestinians.

Zahar emphasized that no pressure or privilege can persuade Hamas to give up strengthening ties with Tehran.

Media reports said on December 19 that Saudi Arabia had offered to put up the funds for the Hamas’ entire annual budget if the resistance movement suspended all its communication with Iran, adding that the Palestinian faction has turned down the offer.

According to a report released by Debka file, the Saudi regime called on Hamas to sever its all-out ties with Iran and promised in return to provide funds for the military spending of the faction, as well as covering the full cost of rebuilding the Gaza Strip after the ravages of the Israeli 51-day offensive.

The Saudi regime believed that its package would be too generous to resist, but Hamas refused to even send a reply.

“They must totally sever their military, political and financial ties with Iran. In token of this action, Hamas Political Chief Khaled Meshaal must call off his impending trip to Tehran, scheduled to mark the public announcement of the organization’s reconciliation with Iran and its leading ally, Syrian President Bashar Assad,” Debka file reported.

Saudi Arabia has been enraged by the recent rapprochement between the Palestinian Hamas Resistance Movement and Iran.

“Some Saudi intelligence officials officially contacted some Hamas leaders outside the Gaza Strip regarding recent developments in relations between Hamas and Iran,” said the Palestinian Al-Ray media agency.

The source added that Saudi Arabia had expressed anger over Hamas’ policies toward Iran, calling on the Palestinian faction to suspend all communication with Tehran.

A Hamas delegation visited Tehran last week with a view to improving relations with Iran.

Speaking at a Gaza City rally, Brigades Spokesman Abu Obeida thanked Iran for its “support of the Palestinian resistance” by providing rockets that had been used against Israeli targets during the Zionists’ deadly summer offensive.